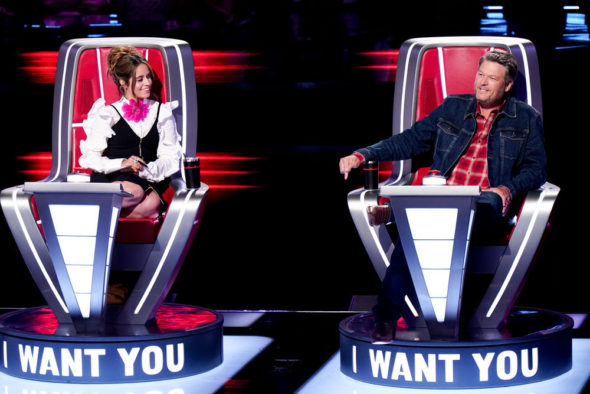 A new coach has entered the competition in the 22nd season of The Voice TV show on NBC? As we all know, the Nielsen ratings typically play a big role in determining whether a TV show like The Voice is cancelled or renewed for season 23. Unfortunately, most of us do not live in Nielsen households. Because many viewers feel frustrated when their viewing habits and opinions aren’t considered, we invite you to rate all of the 22nd season episodes of The Voice here. *Status Update Below.

An NBC singing competition series, The Voice TV show is hosted by Carson Daly and airs twice weekly — typically on Monday and Tuesday nights. John Legend, Gwen Stefani, and Blake Shelton return to coach in season 22 and are joined by first time coach Camila Cabello. She previously served as battle advisor to Team Legend in 2021. This season’s battle advisors are Charlie Puth (Team Camila), Jazmine Sullivan (Team Legend), Sean Paul (Team Gwen), and Jimmie Allen (Team Blake). The competition is divided into four stages: blind auditions, battle rounds, knockouts, and live performances. By the end of the blind auditions, 48 performers will have been chosen by the four coaches (12 for each team). They advance to the battles, knockouts, and live performances. In the end, only one will receive the $100,000 prize and a record deal with Universal Music Group.

What do you think? Which season 22 episodes of The Voice TV series do you rate as wonderful, terrible, or somewhere between? Do you think that The Voice should be cancelled or renewed for a 23rd season on NBC?

I lost interest in The voice when noticed that most winners are country singers, was hoping it has changed with season 22! But from what I see after last night, The Voice is not a fair thing

Definitely renewed, but please NO Gwen, she ruins the show, she acts like a little school girl with her first crush, she can’t stay away from Blake, disgusting. I love the show but I can’t tolerate her.

Gwen Stefani is so full of herself, she needs to go. This show has become more about the 4 coaches bantering among themselves and less about the people auditioning.

The show is about what you want it to be. It’s entertaining; no one who has a gripe has to watch!