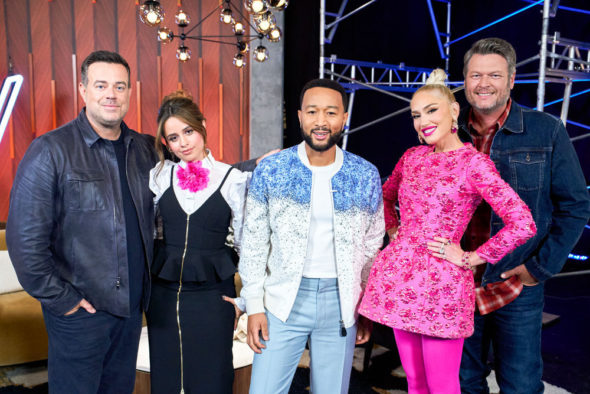 Airing on the NBC television network, The Voice TV show is hosted by Carson Daly and airs twice weekly — typically on Monday and Tuesday nights. John Legend, Gwen Stefani, and Blake Shelton return to coach in season 22 and are joined by first-time coach Camila Cabello. She previously served as a battle advisor to Team Legend in 2021. This season’s battle advisors are Charlie Puth (Team Camila), Jazmine Sullivan (Team Legend), Sean Paul (Team Gwen), and Jimmie Allen (Team Blake). The competition is divided into four stages: blind auditions, battle rounds, knockouts, and live performances. By the end of the blind auditions, 48 performers will have been chosen by the four coaches (12 for each team). They advance to the battles, knockouts, and live performances. In the end, only one will receive the $100,000 prize and a record deal with Universal Music Group.

The Monday editions of the 22nd season of The Voice average a 0.67 rating in the 18-49 demographic and 6.11 million viewers. Compared to season 21, that’s down by 20% in the demo and down by 10% in viewership in the live+same day ratings (includes DVR playback through 3:00 AM).

The Tuesday editions of the 22nd season of The Voice average a 0.71 rating in the 18-49 demographic and 6.13 million viewers. Compared to season 21, that’s down by 13% in the demo and down by 11% in viewership in the live+same day ratings (includes DVR playback through 3:00 AM).

While these numbers don’t include further delayed or streaming viewing, they are a very good indicator of how a show is performing, especially when compared to others on the same channel. There can be other economic factors involved in a show’s fate, but typically the higher-rated series are renewed and the lower-rated ones are cancelled. Find out how The Voice stacks up against other NBC TV shows.

Will NBC cancel or renew The Voice for season 23? The show isn’t nearly as big in the ratings as it once was, but the competition still performs quite well for the peacock network. I have no doubt that NBC will renew it. I’ll update this page with breaking developments. Subscribe for free alerts on The Voice cancellation or renewal news.

What do you think? Do you hope that The Voice TV show will be renewed for a 23rd season? How would you feel if NBC cancelled this TV series, instead?