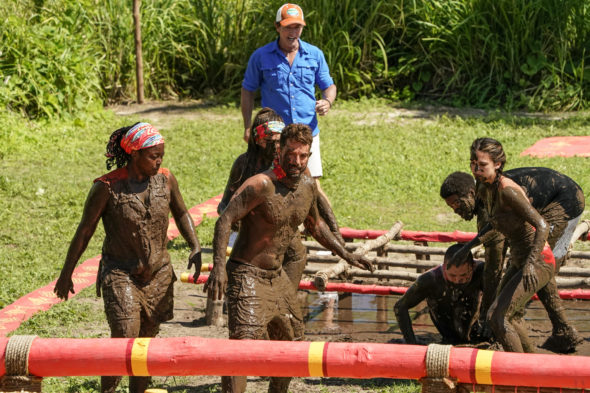 New challenges are on tap for the 43rd season of the Survivor TV show on CBS. As we all know, Nielsen ratings typically play a big role in determining whether a TV show like Survivor is cancelled or renewed for season 44. Unfortunately, most of us do not live in Nielsen households. Because many viewers feel frustrated when their viewing habits and opinions aren’t considered, we invite you to rate all of the 43rd season episodes of Survivor here.

A CBS competition series, the Survivor TV show is hosted (as always) by Jeff Probst. In this 43rd edition, 18 new players are relocated to the beautiful islands of Fiji. They must form a society and adapt to their physical and social surroundings, forcing players to choose between personal risk and reward, while navigating the complex social game and attempting to forge alliances to last another day. The castaways are split into three tribes — Vesti, Baka, and Coco. In the Vesi Tribe (Red), there’s Cody Assenmacher, Jesse Lopez, Dwight Moore, Nneka Ejere, Justine Brennan, and Noelle Lambert. Baka Tribe (Yellow) is made up of Mike “Gabler” Gabler, Owen Knight, Sami Layadi, Elie Scott, Morriah Young, and Jeanine Zheng. The Coco Tribe (Blue) members are James Jones, Ryan Medrano, Geo Bustamante, Lindsay Carmine, Karla Cruz Godoy, and Cassidy Clark. In the end, only one will remain to claim the title of Sole Survivor and win a $1 million prize.

What do you think? Which season 43 episodes of the Survivor TV series do you rate as wonderful, terrible, or somewhere between? Are you glad that Survivor has been renewed for a 44th season on CBS?