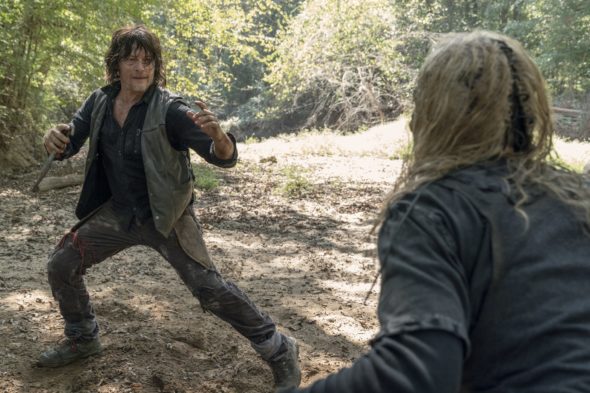 There’s mixed news for fans of AMC’s The Walking Dead series.  At today’s Comic-Con@Home panel for the zombie drama, it was announced that the season 10 finale, titled “A Certain Doom”, will air on Sunday, October 4th, at 9:00 PM. The cable channel released a sneak peek video of the episode’s first minutes.

Technically, it’s no longer considered a season finale though since AMC has revealed that six additional episodes will be produced for season 10. They are planned to air in early 2021.

As expected, season 11 of The Walking Dead won’t be airing this year, due to the COVID-19 pandemic. At today’s panel, showrunner Angela Kang assured viewers that the series’ writers have been working on the next season remotely. She also teased that they’d have more to say about the additional season 10 episodes soon.

Here’s the Comic-Con@Home panel (which is available for a limited time):

What do you think? Are you a fan of The Walking Dead TV series? Are you looking forward to the 10th season continuation of this AMC show?

end of the whisperers ?

cant wait for the episodes to start…hope the whisperers story end soon though, its been a long plotline, that never really materialized, in my opinion, and kind of dragged a bit.

Cannot wait, absolutely my favourite show. It has everything. Romance, horror, suspense and even some
comedy. Best program ever.

end of the whisperers ?
Reply to  Sharon

can do WITHOUT so much “romance” its turning more into a soap opera than a horror show to me.