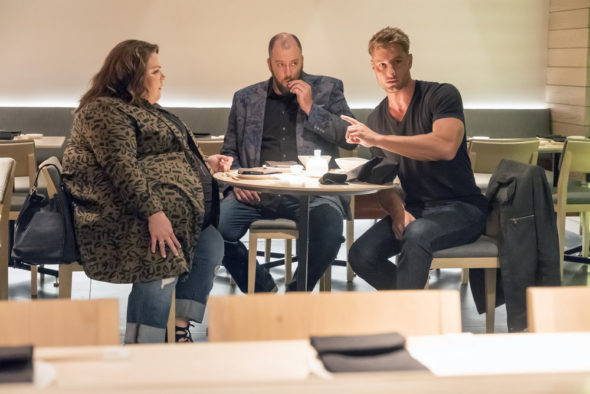 What else does fate have in store for the Pearson family? Is the This Is Us TV show cancelled or renewed for a third season on NBC? The television vulture is watching all the latest cancellation and renewal news, so this page is the place to track the status of This Is Us, season three. Bookmark it, or subscribe for the latest updates. Remember, the television vulture is watching your shows. Are you?

This Is Us, season two, kicks off with the “Big 3’s” 37th birthdays. Meanwhile, Randall (Brown) and Beth (Watson) mull over a big life change; Kate (Metz) ponders a new passion; and Kevin (Hartley) tries to strike a balance between the professional and personal. In the past, Jack (Ventimiglia) and Rebecca (Moore) have to handle the consequences of their big fight.

The second season of This Is Us averaged a 3.07 rating in the 18-49 demographic and 11.14 million viewers. Compared to season one, that’s up by 15% and up by 13%, respectively. Learn how This Is Us stacks up against the other NBC TV shows we are tracking.

Fans shouldn’t have to spend time wondering whether NBC will cancel or renew This Is Us TV for season three. The Peacock Network picked up the second and third installments, back in January of 2017. And they did so with good reason. This Is Us even outperformed the ratings juggernaut which is The Voice in its 2016-17 demo ratings. Did they make the right decision, or will they end up cancelling the third season renewal? Many hit shows have floundered in their second seasons. I will keep an eye on the Nielsens and update this page with breaking developments. Subscribe for free updates on any This Is Us cancellation or renewal news.


What do you think? Should NBC cancel or renew its This Is Us TV show, beyond season three? How long would you like to see this TV series last?

This show needs to be cancelled. Too much touchy/feely stuff!

This is the most phenomenal show I’ve ever seen! Please don’t cancel it!!

No no no. Don’t cancel. It’s my favorite show

They will never cancel the most popular show they have. This show will run for at least 3 more years mark my words.

No surprise here, This Is Us is a stellar show and I expect to see it for many more seasons!