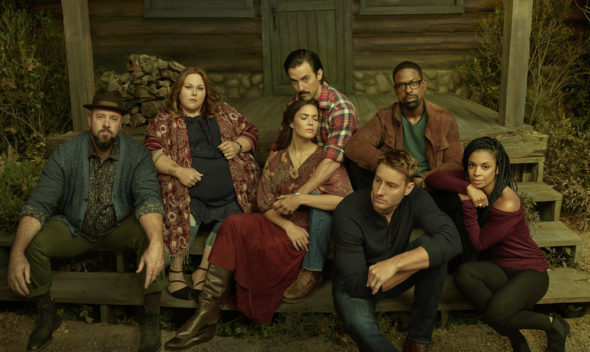 Are viewers still in love with the Pearson family? Has the This Is Us TV show been cancelled or renewed for a fourth season on NBC? The television vulture is watching all the latest cancellation and renewal news, so this page is the place to track the status of This Is Us season four. Bookmark it, or subscribe for the latest updates. Remember, the television vulture is watching your shows. Are you?

The third season of This Is Us averaged a 2.02 rating in the 18-49 demographic and 8.32 million viewers. Compared to season two, that’s down by 34% and 25%, respectively. Find out how This Is Us stacks up against other NBC TV shows.

This series continues to be a top-rated show for NBC so I’m sure This Is Us will be renewed for a fourth season. I’ll update this page with breaking developments. Subscribe for This Is Us cancellation or renewal alerts.

ABSOLUTELY – I have been sick with Coronavirus-19 and pneumonia for over 4+ months, during that time my husband died in a nursing home his oldest daughter put him in (where she worked – 2-1/2 hours from our home). I never got to see or talk to my husband until 183 days after the daughter kidnapped him from our home – when I was upstairs changing clothes to take my husband on an errand with me. I’m not so sure you can understand why this show I just begun bingeing on has meant to me and helped me cope since… Read more »

I don’t like how the show takes breaks at the oddest time like this week. I was looking forward to see what was going to happen .once again took a break.

I have been watching on Demand. And there are just to many questions to cancel it. So please continue it.

Please do not cancel, This is Us. There aren’t many (very very few) decent good shows on television. I don’t have cable or satellite. I can’t afford it. It seems every time there’s a GREAT show that’s aired on television it never lasts long and becomes very disappointing. I’m not the only one whom loves this show and I’m speaking for all of us too please do NOT cancel This is Us. This is one of few the very BEST shows on television. Especially for those of us who don’t and can’t afford satellite or cable. Thank you

Surely they’re not even thinking about canceling! I love this show! There’s not many good shows to watch on TV and this is truely a good one! They have done an excellent job going through all the different seasons of peoples lives and all the connections with extended family! Please I pray they don’t take it off !!

Please don’t cancel the show I love it. It not many good shows on now, every time I fall in love with a show they cancel it. Please please don’t take it off. . Thank you

I would definitely be disappointed if the series was cancelled. Besides great acting, this series brings the Pearson family to life portraying real life. They are heart-warming and real.

I really have enjoyed this series…am in Germany and able to follow, after paying, on Amazon. I do hope it will continue. Excellent continuum, fine acting, marvelous writing, moving and emotional and realistic episodes. Thanks for the terrific series!

Hope it will be renewed.

It would be extremely disappointing if This Is Us is cancelled. This is a fabulous heartwarming series. Please renew the series for many more years to come. AOL.com