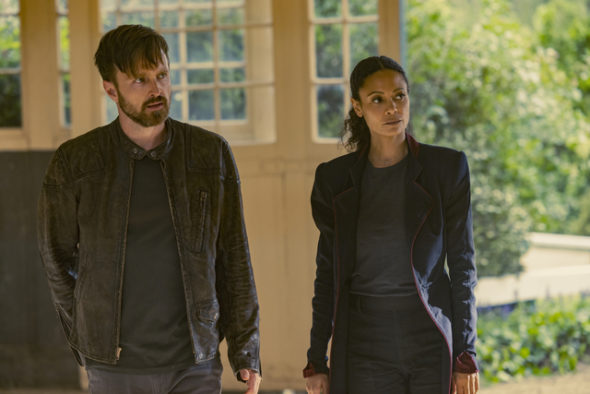 Have viewers forgotten about this show? Has the Westworld TV show been cancelled or renewed for a fifth season on HBO? The television vulture is watching all the latest cancellation and renewal news, so this page is the place to track the status of Westworld, season five. Bookmark it, or subscribe for the latest updates. Remember, the television vulture is watching your shows. Are you?

Airing on the HBO cable channel, the Westworld TV show stars Evan Rachel Wood, Thandiwe Newton, Ed Harris, Jeffrey Wright, Tessa Thompson, Luke Hemsworth, Aaron Paul, Angela Sarafyan, and James Marsden with Ariana DeBose, Aurora Perrineau, and Daniel Wu. Created by Jonathan Nolan and Lisa Joy, the drama series unfolds in a pricey, futuristic theme park, where visitors pay to act out their Wild West fantasies while interacting with lifelike robot “hosts.” The fourth season picks up over seven years later after the protracted war and humanity is finally free. Or so it seems. Maeve and Caleb begin to suspect that Hale and a host version of The Man in Black are trying to regain control of the human race. Meanwhile, Bernard returns from The Sublime. A young writer, Christina, begins to question the nature of her reality.

The fourth season of Westworld averages a 0.06 rating in the 18-49 demographic and 343,000 viewers in the live+same day ratings (including DVR playback through 3:00 AM). Compared to season three, that’s down by 74% in the demo and down by 58% in viewership. While these numbers don’t include further delayed or streaming viewing, they are a very good indicator of how a show is performing, especially when compared to others on the same channel. There can be other economic factors involved in a show’s fate, but typically the higher-rated series are renewed and the lower-rated ones are cancelled. Find out how Westworld stacks up against other HBO TV shows.

Will HBO cancel or renew Westworld for season five? The show has been one of the channel’s most popular series and one of HBO’s signature shows. It’s been more than two years since the end of the third season and viewing habits have changed a lot since then but, unless the creators plan to end the series, I think Westworld will be renewed.  I’ll update this page with breaking developments. Subscribe for free alerts on Westworld cancellation or renewal news.

What do you think? Do you hope that the Westworld TV show will be renewed for a fifth season? How would you feel if HBO cancelled this TV series, instead?

ENOUGH already. Let’s put Westworld to sleep. (Before it does it to us.)