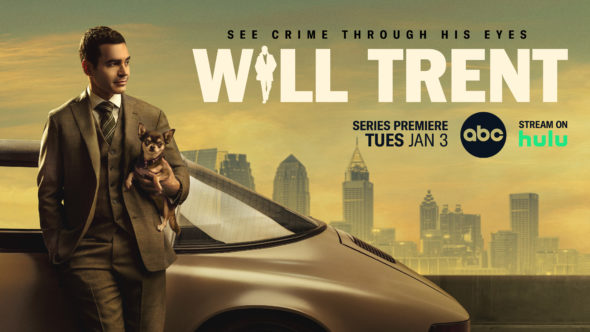 Neither of ABC’s two new drama series has been a big hit in the ratings. One of them, The Rookie: Feds, had been airing on Tuesdays at 10 PM, a historically challenging timeslot for the alphabet network. The programmers have now made some changes to the schedule and put the new Will Trent series in that slot. Will it succeed where other shows have struggled? Will Will Trent be renewed for a second season, or will it be cancelled? Stay tuned.

A procedural drama series, the Will Trent TV series is based on the book series by Karin Slaughter and stars Ramón Rodríguez, Erika Christensen, Iantha Richardson, Jake McLaughlin, and Sonja Sohn. The story follows Special Agent Will Trent (Rodríguez) of the Georgia Bureau of Investigation (GBI). A loner, he has the highest clearance rate in the GBI and can deconstruct a crime scene like no one else. Will was abandoned at birth and endured a traumatic childhood in Atlanta’s overwhelmed foster care system. Despite his personal challenges, he’s determined to use his unique point of view to make sure no one is abandoned like he was. Angie Polaski (Christensen) and Michael Ormewood (McLaughlin) are both detectives with the Atlanta Police Department but have very different backgrounds. Faith Mitchell (Richardson) is Will’s new partner at the GBI and was born into a law enforcement family. Amanda Wagner (Sohn) is the head of the GBI and Will and Faith’s boss.

2/1 update: You can see the latest night’s ratings in context.

What do you think? Do you like the Will Trent TV series on ABC? Should it be cancelled or renewed for a second season?

We really enjoy the show. Will Trent has the ability to solve a case from his own unique way. We hope it gets renewed.

A good enough character and back up cast. But the show is incredibly bland.

Enjoying Will Trent so far. Encouraging that ratings haven’t slipped through ep5.

Will Trent is an excellent crime show. The characters are interesting: the Unique, and worthy of a second season.