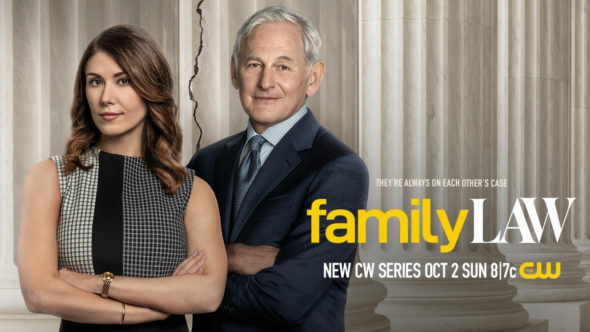 The Family Law series originates in Canada where it’s already been renewed for seasons two and three. However, there’s no guarantee that The CW will keep airing the series if the ratings aren’t good enough. Will Family Law be renewed or cancelled on the smallest network? Stay tuned.

A legal drama series, the Family Law TV show stars Jewel Staite, Victor Garber, Zach Smadu, Genelle Williams, Lauren Holly, and Bobbi Charlton. In the story, Abigail Bianchi (Staite) is a lawyer and a recovering alcoholic. She’s struggling to put her career and family back together after hitting rock bottom. As a condition of her probation, Abby is required to work at Svensson and Associates, the law firm of her estranged father, Harry (Garber) law firm. She’s practicing family law for the first time and finds herself managing not just her clients’ family dysfunction, but her own. In addition to navigating a relationship with her father, Abby is also working with her attorney half-brother, Daniel (Smadu), and her psychiatrist half-sister, Lucy (Williams) — two people she’d never met.

What do you think? Do you like the Family Law TV series on The CW? Should it be cancelled or renewed for a second season?

Family Law is excellent – great concept to bring recovery to the small screen – after the first episode, the show holds promise –