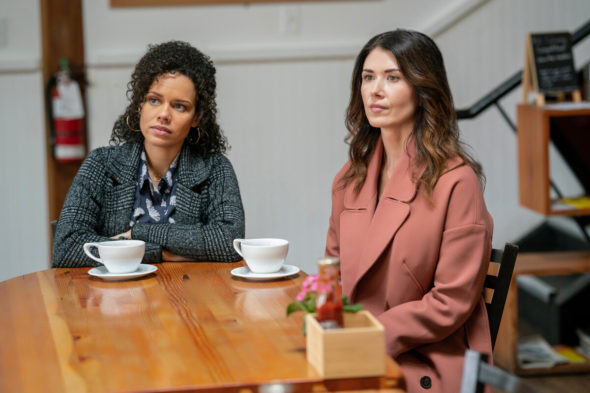 Abby is working to hold it together in the first season of the Family Law TV show on The CW. As we all know, Nielsen ratings typically play a big role in determining whether a TV show like Family Law is cancelled or renewed for season two. Unfortunately, most of us do not live in Nielsen households. Because many viewers feel frustrated when their viewing habits and opinions aren’t considered, we invite you to rate all of the first season episodes of Family Law here.

A CW legal drama series, the Family Law TV show stars Jewel Staite, Victor Garber, Zach Smadu, Genelle Williams, Lauren Holly, and Bobbi Charlton. In the story, Abigail Bianchi (Staite) is a lawyer and a recovering alcoholic. She’s struggling to put her career and family back together after hitting rock bottom. As a condition of her probation, Abby is required to work at Svensson and Associates, the law firm of her estranged father, Harry (Garber) law firm. She’s practicing family law for the first time and finds herself managing not just her clients’ family dysfunction, but her own. In addition to navigating a relationship with her father, Abby is also working with her attorney half-brother, Daniel (Smadu), and her psychiatrist half-sister, Lucy (Williams) — two people she’d never met.

What do you think? Which season one episodes of the Family Law TV series do you rate as wonderful, terrible, or somewhere between? Do you think that Family Law should be cancelled or renewed for a second season on The CW?