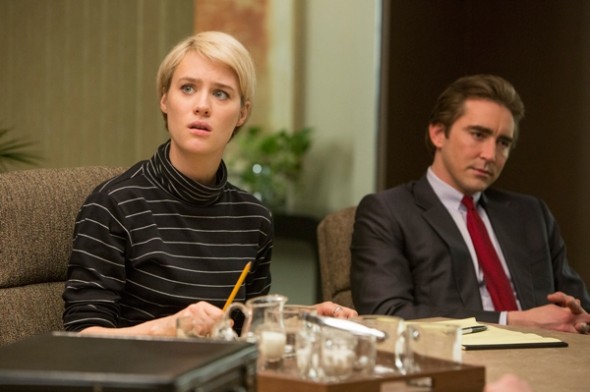 Last night marked the end of the first season of Halt and Catch Fire on AMC. Will it also be the end of the whole series? Does this freshman show deserve a sophomore season or should it be cancelled to make way for something new?

The series debuted on June 1st to just 1.2 million viewers and a 0.3 rating in the 18-49 demographic. Not a positive start. (Two months earlier, Turn had premiered to 2.1 million viewers and a 0.5 rating.) In week two, the audience grew to 1.4 million but then, viewership plummeted to just 765,000 in week three. The numbers got even worse in later weeks — dropping to 550,000 viewers.

Based on the ratings, there’s no reason to expect AMC to renew Halt and Catch Fire for a second season. Viewership just seemed to keep going lower and lower each week and that certainly didn’t inspire confidence with the cable channel execs.

Still, AMC has renewed ratings-challenged shows in the past, hoping that they just need time to grow (Turn, for example). Of course, they’ve also cancelled them too. Low Winter Sun was cancelled — and didn’t drop as low as Halt did.

Though there are some devoted fans, it seems highly unlikely that Halt and Catch Fire will be given a second season.

What do you think? Do you like the Halt and Catch Fire TV show? Do you think it should be cancelled or renewed for a second season? Are you satisfied with how the show ended if there’s only one season?

8/20 update: AMC has renewed Halt and Catch Fire for a second season.

I think that Halt and Catch Fire should be renewed for a 2nd season. I find it very interesting and intelligent. The story is very good and the acting is amazing. Please give it chance. A series like this needs time to “catch fire” if you get my meaning. But seriously please give them the opportunity to develop and finish up this smart and really good show

I have to admit that the show was boring at times. I think I loverlooked it because I was so interested in the concept and because I really loved the characters. Can’t stress that last bit enough. I wish they had done a better job of weaving the technology into each of the episodes, that was a big draw for me. There were definitely some episodes where it seemed like all we got was character and relationship development, which is okay, but in a show about the development of computer technology over the past 30 years I really want to… Read more »

One crucial factor is that “Halt and Catch Fire” had no major lead-in show; both the examples you provided had either “Mad Men” or “Breaking Bad”. I believe is the very first AMC show to have an entire first season air without another show just after to help it along. For those wanting the show to be renewed, you should either email AMC or tweet it, as I’ve done, at @AMC_TV. Please do so! We have a shot!

Finally an intellectual and dynamic show that has complicated, yet very likable characters. Please let us follow them for another season to see see them grow, intertwine and develop.

The show is fantastic. The characters are growing and its quite honestly some of the best TV on right now. But because you need half a brain to understand it I’m sure it won’t last more than 2 seasons. Its a shame. All people want is crime dramas and reality TV these days. Have we really stooped that low as a society? Anyway it deserves a second season!

I really hope they bring it back. It’s my favorite show currently on TV. I’ve never watched AMC before. Caught Breaking Bad on Netflix. HACF has brought me in and exposed me to some other good AMC shows. That said, no more HACF and I probably won’t bother following the others.

Please don’t cancel Halt and Catch Fire. I think it at least deserves another season. It was really starting to have a plot and adding in the different relationships started getting exciting. I think it needs a little more time and word of mouth to “catch fire”. Sorry. That was bad.

I would love to see this show have a second season!!! I find it intriguing with complex characters….

Thanks for the spoiler, Frank. Awesome.

I ihink this show deserves a season 2. Sure, low ratings but everyone I know loves it.

Just read some diatribe about HACF over at Grantland. I’m lost and extremely disappointed as to why people don’t love this show. I guess we need more crime/medical shows, even though I haven’t seen anything as good as Columbo and Quincy over the past 30 odd years.

The last few episodes of HACF renewed my interest in modern TV.

well, that does it! It seems like every single show I watch gets cancelled. It’s no longer amusing, it’s downright depressing. You find the show that you like, you put the time in with it, identify with the characters and then it’s gone. Actually, I suppose that it does reflect real life in that sense. Oh well, I guess I’ll have to take up the tuba, and just watch UNreallity tv. Sigh….

The lead character Joe, pissed me off with his passive agressive behavior, it seemed like all he did was try to sabatouge the company, maybe they’ll give it closure for the second season. It looked like there may’ve been a chance until Joe torched the shipment of computers, but we’ll see.. I was really looking forward to Low Winter Sun to have returned but not to be, oh well.

Please renew Halt and Catch Fire! It’s a great show. I read earlier comments after the show premeiered and many said they watched 10 minutes or so and found it boring. That is maddening and perlexing…characters and storylines must be developed…sure hope AMC gives it another season.