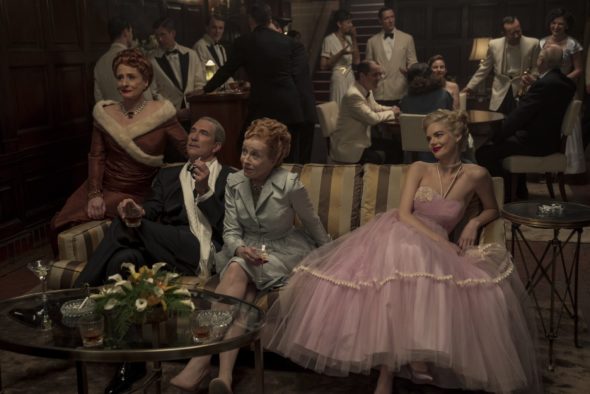 Could this fantasy series have a sequel? Has the Hollywood TV show been cancelled? Renewed for a second season on Netflix? The television vulture is watching all the latest cancellation and renewal news, so this page is the place to track the status of Hollywood, season two. Bookmark it, or subscribe for the latest updates. Remember, the television vulture is watching your shows. Are you?

Unless they decide to publicize viewership, it is difficult to predict whether Netflix will cancel or renew a show like Hollywood for season two. Since Netflix isn’t ad-supported, it can take a chance on series it believes in and stories that need telling, but sooner or later it comes down to production costs, versus viewership numbers. Generally speaking, Netflix TV shows which are going to be renewed are usually picked up within a month or so of the series or season premiere. That being said, this appears to be a true close-ended mini-series so I’m not holding my breath waiting for a renewal. Still, I’ll keep my ears open and an eye out for news, and will update this page with breaking developments. Subscribe for free alerts on Hollywood cancellation or renewal news.

What do you think? Do you hope the Hollywood TV show will be renewed for a second season? How would you feel if Netflix cancelled this TV series, instead?

Hollywood (a dark comedy) presents the mostly unknown side of “making it” and that the casting couch existed for both male and females. Astonishing reveal about people loosing their moral compass to achieve stardom.