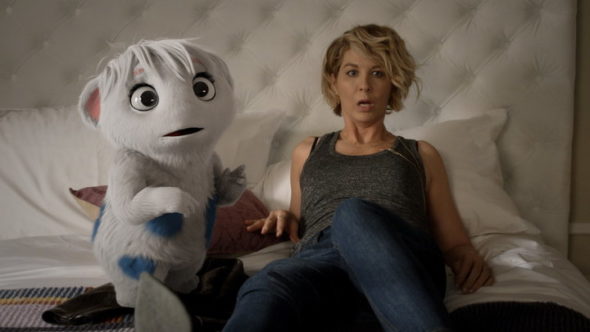 You don’t have to imagine the future of Imaginary Mary any longer. ABC has cancelled the freshman TV series so there won’t be a second season.

There were early signs of trouble for Imaginary Mary. Before the show even premiered, ABC cut its season one episode order down from 13 to nine. Then, the series debuted in March to a mediocre rating of 1.37 in the 18-49 demo and 5.39 million viewers. Since then, the ratings have slipped much further. Currently, season one is averaging a 0.92 rating in the 18-49 demo and 3.34 million viewers

What do you think? Have you seen Imaginary Mary? Do you think ABC should’ve given the series more time and a second chance?

I wish that we consider canceling imaginary Mary. I love Jenna Elfman, and enjoyed watching the show. The acting was good, and the storylines always entertain!

That’s too bad. I’ve always liked Jenna Elfman and I thought this was a descent show. I was hoping for a second season.

I don’t believe you’re canceling this show. We love it. My feelings are hurt. They really need another season.

I really liked this show funny kids that are normal and parents.Typical ABC cancels very good shows and changes the day it started on wednesday moved to tuesday.At first had hard time finding it.I have gave up trying to like shows here.No network gives shows a chance and they should some of are best sitcoms did not start out gleaming.Time gives audience a chance to like shows.

Jenna Elfman creeps me out. All I can think is her attacking people calling them baby rapers or whatever it was she went on about. I don’t think she can hold up a show anymore.

I like that Alice makes sure that she’s not seen talking to Mary. That makes her character cool and smart. How does ABC know how many are watching anyway? I watch it on digital television. It’s much sharper then cable TV in my area. Maybe they don’t like the beard. It’s a turnoff.

“Ted” meets “The Mick” with less than great results. Just not a good show. ABC saw the writing on the wall.

I love Imaginary Mary especially Mary! Please give the show another chance! This is not cool!!!!

It was starting to grow on me. The kids were good actors. And Mary’s role was reduced which helped. Oh well. Why not just produce Dharma and Greg twenty years later. With teenage children, parents. Could work?

I liked this show.. They could’ve given it more time…

Horrible show. I am VERY laid back and will stick with something long after others have abandoned it, but I couldn’t stomach more than one episode of this drivel. Sorry.

I am sorry I love Elfman but this show was just bad. I hope they give her something worthy of her talents as I would love to see her back on TV.

I had never heard of it until now, so apparently ABC failed to advertise it well.

Aw c’mon. The first actual new concept comedy to come along in years…and you blankety blanks cancel it without really giving it a chance? Seriously? What does it take for you people to , at least, let it go 2 seasons??? Well, I tell you NetFlix is looking more and more friendly for our viewing pleasure..