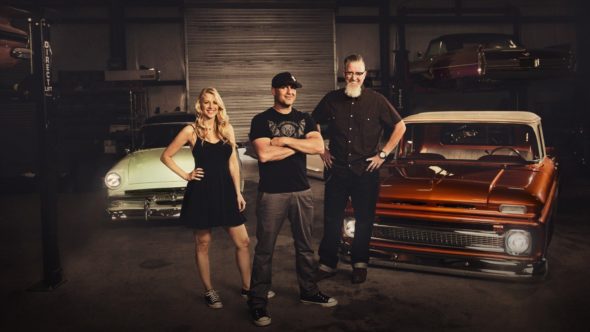 Iron Resurrection is back in action! Recently, Velocity announced the TV show will return for a third season in September.

The docuseries “takes viewers inside Martin Bros Customs where Joe Martin, his wife Amanda, his best friend Jayson “Shag” Arrington, and a team of top-notch craftsmen restore life to rusted out roadsters, busted bikes and torn up trucks of all makes, models, shapes and sizes.”

(Silver Spring, Md.) – Cars are never truly dead in the eyes of Joe Martin and his team at Martin Bros Customs outside Austin, Texas. For years, they’ve knocked off the rust and resuscitated rides destined for the junkyard with their signature brand of cool. In season three of the hit series IRON RESURRECTION the Martin Bros Customs team returns to breathe new life into new crop of lost causes beginning Tuesday, September 4 with special back-to-back episodes at 9 and 10 PM ET/PT on Velocity, America’s #1 television destination for automotive superfans.

Each episode finds Amanda and Shag roaming the Texas countryside for lackluster vehicles that the shop can transform in masterpieces of four- or two-wheeled metal. Amanda has an eye to spot potential deals and knows where to find the good stuff while Shag, dubbed “the fastest mouth in the south”, has the skills to haggle car or motorcycle owners for the best possible price. Once they secure a vehicle it goes back to the shop where Joe and his small but hugely talented team of Shorty, Mike, Jason, Manny and Pompa use their customization, fabrication, mechanical and painting skills to make Joe’s automotive vision into reality. Raising the dead is never easy, but together this Texas team of gearheads can restore any rusted pile of metal into the hottest cars and craziest choppers in the world.

It takes a lot to faze Joe Martin, but when his next job pulls into the shop it looks more like a truck load of spare parts than a 1970 C10. Joe’s got a vision and knows exactly what he wants to do – new frame, running gear, and a super charged LSA engine will give this truck real grunt and fantastic handling.

Gary Hopper, a longtime friend of Joe, brings a 1955 Chevy Bel Air to the shop. This ’55 has sentimental value to Gary’s family, putting the pressure on the team to do this build right, but missing pieces, a dented hood and a complicated new fuel injection system all throw a wrench into the job.

Joe Martin can’t believe his eyes when a straight 1963 Chevy Impala with a four speed and legendary 409 engine under the hood makes its way into Martin Bros Customs. The owner wants to keep it original with the main modifications under the body including a new frame, suspension and big wheels. Instead of replacing this power plant they’re bringing it back to life with a complete overhaul. When it’s done it’ll be 1963 all over again.

Shane, a new customer, comes into the shop with an exceptional 1963 Cadillac. This car screams luxury but needs an upgrade, and the Martin Bros Customs team gets to work planning for a new engine, new wheels, new interior and a custom paint brew from Shorty. Once Joe gets done with this old beige boat it will once again be at the top of the car food chain.

Return customer Lee Farris comes to Martin Bros Customs with a real gem – a 1956 Chevy Bel Air. The car was Lee’s very first and he wants to bring it back to life. The first thing Joe notices is the outdated flame paint job. Joe’s plans: upgrade the interior, new engine, and a new paint job. With the tear down underway, Lee throws the team a curve ball, he wants to keep the old paint job.

Joe Martin loves to push the limits. When a customer rolls into the shop with a 1950 Mercury Coupe he wants to chop the top. It’s a high-risk custom that could destroy this classic and will certainly push the limits of the Martin Bros Customs team. Do they have the chops for this top?

With the 1950 Mercury successfully chopped the rest of the work can begin. The team now must marry the old roof with the new geometry of the newly chopped body. The angles everywhere are all out of whack as Joe and the team go into surgery to start stitching this patient back together. Question is, “will the car survive?”

What do you think? Have you seen Iron Resurrection? Will you watch the new season?

will there be a “Brother’s Nova” part 3

is iron resrection coming back

In my opinion it is the best car show out there and i watch them all. Wish I could buy the episodes on dvd. I especially like season 2 episode 1 grim reaper .

Jumped in late to watch Iron resurrection , been watching it for only two years now I see it won’t be on motor trend or will it . I mean it’s on now . But guilds not showing it next week. Wish I could get my 70 monte there so they could help me with it . Oh it would make it travel wise it the $$ $ . Great show I learn a lot . They don’t cut corners. There serious about there work . Great job Vatos .

please do not take this show off the air, to me its the best show to watch on TV, no violence, just a happy group of people getting along and doing a great job on cars. Plus having fun doing what they are meant to do and thats great work and turning out beautiful cars. Shorty you are the best for mixing up beautiful colors for the cars you paint.

It would be nice to have a great show that lasts for ever, but then reality set’s in. With that said I love Joe and the gang and the awesome work they do.

Always Waiting for the next new ones

I really love the show. I watched the Martin brothers back when they built motorcycles on tv. Joe has a lot of talent, back then he did all the custom paint jobs. Iron Reserection shows Joes design skills, building, welding etc. he can do it all. Their right blend of workers add a lot to the show not only for their talent but the interaction between the staff created humor and fun as well.

This is a great show, I love watching how cars are brought back to life and it is done right. These folks are master craftmen. I like seeing how they do the rebuilding. I wish I had my 1960 Chrysler so they could rebuild it. Keep up the good work, Joe!

I used to like this show as they tell stories on how they rebuild cars in details; viewers are not just entertained but also educated. Now it’s kinda difficult to watch it as the editing is too fast (it gives me headache); you can’t see the work in progress anymore. Aside from that, it feels like a talk show now more than a car rebuilding show. Wake up makers of this show. It sucks!

Great show i like about them they restore old cars & having fun and jokes! Plus every thing done in Texas. I buy 67 Ford Galaxie 500 Convertible from my dad friend need some work on it. I had engine rebuilt 97000 miles & paint, dress up but lose my job and can`t get it done. I am saving money have frame work on and put it up for sale & 18 foot trailer too! Mr. Joe Martin

This is one of my favorite shows. No drama, no back stabbing one another. They do some out of sight customs. Along the way there’s a lot of laughter. I’m amazed the work they turn out. The show should NEVER be cancelled. When the time comes….I want them to work on my 2000 Plymouth Prowler and my 1923 FORD bucket “T” roadster. I want HEMI’s in both of them. I’m not sure what to do with my 1973 Pantera> Maybe turn it into a GTS, huge wheels and tires……along with out of sight wheel flares. I’m 73 from Oregon. I’ve… Read more »

This is one of my favorite shows. No drama, no back stabbing one another. They do some out of sight customs. Along the way there’s a lot of laughter. I’m amazed the work they turn out. The show should NEVER be cancelled. When the time comes….I want them to work on my 2000 Plymouth Prowler and my 1923 FORD bucket “T” roadster. I want HEMI’s in both of them. I’m not sure what to do with my 1973 Pantera> Maybe turn it into a GTS, huge wheels and tires……along with out of sight wheel flares. I’m 73 from Oregon. I’ve… Read more »