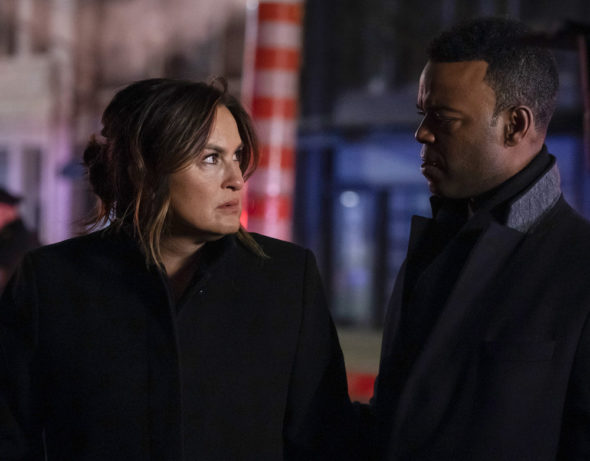 Law & Order: SVU will see two series regulars exit the series in the two-hour premiere of the 23rd season. Jamie Gray Hyder and Demore Barnes (above, right) are exiting the NBC drama after joining during season 21 as recurring cast members. They were both bumped up to series regular status at the start of season 22.

Deadline revealed more details about the premiere of the NBC drama, which picks up soon after the season 22 finale:

“In the first hour of the two-episode premiere, “And the Empire Strikes Back”, Benson’s loyalty to Garland is tested. Rollins and Carisi try to keep their witnesses on board when a powerful congressman is identified as a suspect. Ben Rappaport, Terry Serpico and Octavio Pisano guest star.

In the second episode, “Never Turn Your Back on Them”, the search for a missing witness leads Fin and Kat down a dangerous path. Chief McGrath puts pressure on Garland and Benson to get a conviction. Rappaport, Serpico, Glenn Fleshler and Isabelle Poloner guest star.”

What do you think? Are you surprised by these cast exits for Law & Order: SVU on NBC?

This show is long over due to be cancelled.

Totally shocked that Jamie Gray Hyder is leaving so soon .She brings so much to the show and really slotted in well .Shame .

Since Dick Wolf always seems to be finding ways to expand his TV empire, odds are these two characters are being pulled out of SVU so they can star in the next Law & Order spinoff…. which no doubt will be ready to roll by Spring 2022.