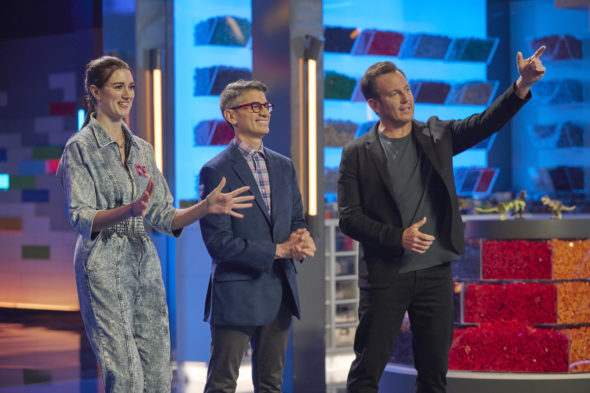 The creative possibilities are endless. Has the LEGO Masters TV show been cancelled or renewed for a fourth season on FOX? The television vulture is watching all the latest cancellation and renewal news, so this page is the place to track the status of LEGO Masters, season four. Bookmark it, or subscribe for the latest updates. Remember, the television vulture is watching your shows. Are you?

Airing on the FOX television network, the LEGO Masters TV show pits teams of LEGO enthusiasts against other teams in challenges of imagination, design, and creativity. Will Arnett hosts while expert Brickmasters and LEGO employees Jamie Berard and Amy Corbett serve as judges. Armed with infinite possibilities and an unlimited supply of LEGO bricks, teams of two compete against each other in ambitious brick-building challenges. In each episode, Arnett and the expert judges encourage the builders, introduce various challenges, and put the builders’ creations to the test. The competing pairs who impress the judges the most progress to the next round while other teams are eliminated. In the finale, the top teams face off for a $100,000 cash prize, the ultimate LEGO trophy, and the grand title of LEGO Masters.

The third season of LEGO Masters averages a 0.36 rating in the 18-49 demographic and 1.47 million viewers in the live+same day ratings (includes all DVR playback through 3:00 AM). Compared to season two, that’s down by 23% in the demo and down by 5% in viewership. While these numbers don’t include further delayed or streaming viewing, they are a very good indicator of how a show is performing, especially when compared to others on the same channel. There can be other economic factors involved in a show’s fate, but the higher-rated series are usually renewed and the lower-rated ones are cancelled. Find out how LEGO Masters stacks up against other FOX TV shows.

Will FOX cancel or renew LEGO Masters for season four? The series has been an okay ratings performer in the past, when the show was airing during the summer months. Now, FOX is airing LEGO Masters as part of the regular season (when competition is tougher) and has given it their top unscripted series as a lead-in. Unfortunately, the numbers are quite low. I suspect the show is relatively inexpensive to produce and is seemingly heavily sponsored. So, despite the very low ratings, I think LEGO Masters still has a good chance of being renewed for a fourth year. I’ll update this page with breaking developments. Subscribe for free alerts on LEGO Masters cancellation or renewal news.

What do you think? Do you hope that the LEGO Masters TV show will be renewed for a fourth season? How would you feel if FOX cancelled this TV series, instead?