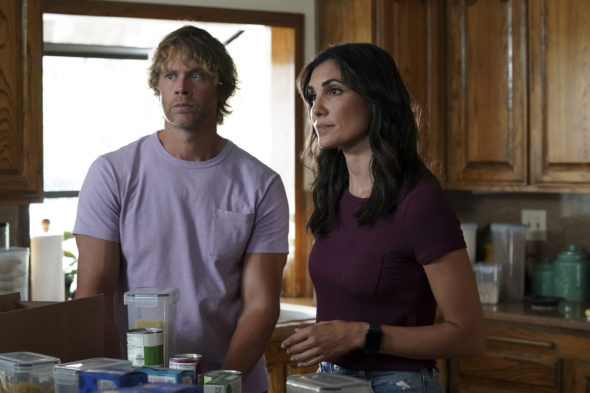 In the 14th season of CBS’ NCIS: Los Angeles TV show. As we all know, Nielsen ratings typically play a big role in determining whether a TV show like NCIS: LA is cancelled or renewed for season 15. Unfortunately, most of us do not live in Nielsen households. Because many viewers feel frustrated when their viewing habits and opinions aren’t considered, we invite you to rate all of the 14th season episodes of NCIS: LA here.

What do you think? Which season 14 episodes of the NCIS: Los Angeles TV series do you rate as wonderful, terrible, or somewhere between? Do you think that NCIS: LA should be cancelled or renewed for a 15th season on CBS?

Let it Burn was ok but Ild rather see G and Sam. I was glad that G was given information about his past I think the Admiral is confused on that topic but down deep he likes Callen (I hope). Praying we hear soon information on S15.

Loved Sam and G. I think G does anything he can to stir up Sam, a snake LOL. Great show. I would love to see all 3 NCIS’s on 1 night but It would be better if Tony would return to NCIS and he and Callen and Sam interacted. @CBS you have a treasure trove in these 3 shows. But to be honest I watch NCIS LA and record it.

love to see Sam and G banter This was not the best writers efforts but when can we see Hetty Anna Arkay and that guy who knows G is 17? Can’t wait for Jan 2 Thanks CBS

I feel like I’m the only one posting here but I’m happy that NCISLA is doing well. Nice to see Deeks mom again. But I have to say seeing Anna and Callen is the best he better find Hetty before Anna doesn’t invite him: )

I am enjoying this season and reading a lot of possitive statements on line. Last nights show was great. I thinks Sam’s dad is ADORABLE. I would love to see Callan and Anna, Arkady and Callen and Hetty. I know this will be coming but I’m happy to see everything the writters are coming up with. Thanks CBS

Also happy to see interaction between Sam and his Dad. His dad is a hoot and I love the possibility of a growing friendship with Arkady, whom I love.

I thought last night show was exciting I missed Callen but that being said this showwas exciting from the begining to the end..Glad to see Sam back, too. the way this ended leaves the story line wide open to resume. CBS & NCISLA keep going the way you are and hopfully we will get S15.

This show is getting old fast.
Time to hang it up and move on . No connection between the two agents and very boring relationship. Hetty is to old to return. Give her a rest.

so happy to see NCIS LA is off to a great start.