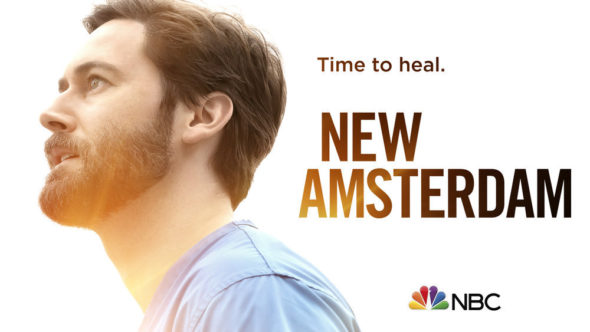 We don’t have to worry about the New Amsterdam TV show being cancelled for quite a while. NBC has already renewed the series for a fourth and a fifth season. But, how will this medical drama perform in the ratings? After a year-long pandemic, are viewers too weary of medical storylines? Stay tuned.

Airing on Tuesday nights, the New Amsterdam TV show stars Ryan Eggold, Freema Agyeman, Janet Montgomery, Jocko Sims, Anupam Kher, and Tyler Labine. Doctor Max Goodwin (Eggold) is a caring physician whose goal is to fix a broken medical system and to provide exceptional care to the people who need it most. He inspires (almost) everyone around him, and will stop at nothing to breathe new life into the understaffed, underfunded, and underappreciated New Amsterdam Medical Center. Those working with Goodwin include Dr. Lauren Bloom (Montgomery), the head of the ER; oncologist Dr. Helen Sharpe (Agyeman); cardiovascular surgeon Dr. Floyd Reynolds (Sims); psychiatrist Dr. Iggy Frome (Labine); and Dr. Vijay Kapoor (Kher), head of the Neurological Department. In season three, Max and his team face the daunting task of sustaining that optimism while dealing with a pandemic that exposed the gaping inequities in our health care. Max is no longer content to fix a broken system. He’s determined to tear it down and build something better.

6/9 update: You can see the latest night’s ratings in context.

For comparisons: Season two of New Amsterdam on NBC averaged a 0.77 rating in the 18-49 demographic and 5.10 million viewers.

What do you think? Do you like the New Amsterdam TV series on NBC? Are you glad that it’s been renewed for a fourth season already?

Note: the content of the show has deteriorated this season to an unacceptable level and I’ve discontinued recording it. Very disappointing.

I have watched all the season so far, but, was disappointed when Dr. Kupor was not in it this season and I don’t like that Dr. Bloom is now turning gay.

It use to be a good show. Now I have to make a decision next season wether or not I want to watch it. Same goes for the Good Doctor that I always looked forward to watching. What has happened to good FAMILY tv shows???

This was my favorite show . But this new season has gone so political and it’s just not the same show . I don’t look forward to it anymore . Wish it would go back to the types of stories from season one .

I watched my last New Amsterdam. Hoping that their fully woke movement would have at least mellowed, it only progressed. Getting social justice from your entertainment is just to much. I do appreciate the movement, however the reason we watch shows like this is to break from in your face world we reside it. Having it just ridiculously and intentionally shoved non-stop into your face through each and every episode actually soars me on the movement. Unfortunate, as the first 2 season were brilliant.

I’m done. Not watching it anymore.. I don’t watch tv much and really enjoyed it up to this season. Pushing agendas I don’t agree with.

I loved the first 2 seasons of New Amsterdam and now the last few episodes are just crap. Sorry to see this happen. I have lost interest in it.

Until this season New Amsterdam was one of my favorite shows. Now that it’s gone all political, I can hardly watch it anymore. This is supposed to be medical drama, not political drama. I’ll give it a couple more episodes to see if they get off the soapbox. If not, I’m very sad to say I’m done.

And get rid of the masks! We need a break from reality!

I’m tuning out. New Amsterdam has become the writers’ personal political soapbox. I can watch that kind of content on a news channel.

Used to be a favorite of mine – love Ryan Eggold – but no more. I don’t need to hear every week how awful the police and white people are. Throwing the pictures of the white male ‘founders’ of the hospital into the trash was extremely racist IMO. You don’t raise up one group of people by trashing another – you add the others to the wall. After alluding that anyone who purchased a gun because they were afraid during the BLM ‘protests’ were racist, I’ve turned the program off for good. I don’t have a gun but there was… Read more »

New Amsterdam was a favorite , in fact the only network show we watched. We mainly watch Brit, European programming. Too bad New Amsterdam is imploding due to PC based writing. I can now cancel cable and stream everything that comes into our home. Another good cast wasted on woke propaganda

I loved New Amsterdam when it started, the characters were amazing. The last month or so they started getting political and I had to say goodbye. Most of my friends did the same. My second favorite medical show, The Good Doctor started with the same BS tonight so they will probably be following suit. Do these writers not realize we sit and watch television to relax (at least I do) and escape the madness which we are now living everyday? They will when the shows end up being cancelled because most people are no longer interested. Thank God for HGTV… Read more »

The good doctor isn’t as bad as this one.

New Amsterdam was one of the 3 shows I watched. Now that every episode is a social justice advertisement, I have an extra hour to work on household projects. Too bad, it had a great start.

Lisa L do what I did binge the Sopranos

I watch tv for entertainment which New Amsterdam was until the social justice people felt I needed something different than entertainment. I have turn off this show for the last weeks/months and will continue to do so. I don’t need this show any more unless it changes it social justice cram it down my throat programming.

I have, and still like New Amsterdam, but the last few shows are dealing with things that shouldn’t be the priority to one hospital. When you have an isolated situation, it should be dealt with. Having said that, making a major mission of one administrator to fix the world, may be a way of making everyone aware of the problem. Unfortunately it’s not entertainment. It’s more or less somebody’s soapbox the show is standing on. The Smothers Brothers tried that in the 60s and were canceled. They took an unpopular war (Vietnam) and tried to create followers to their cause.… Read more »