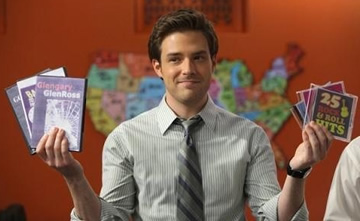 It’s not often that a new show gets some people so angry before it even airs but NBC’s new TV show, Outsourced, certainly rubs some people the wrong way. Did that hurt the ratings? Will it be quickly cancelled or become a long-term staple of NBC’s Thursday night line-up?

Some people have expressed resentment over the show’s theme, especially considering this country’s struggling economy and unemployment problem. Others maintain that the show’s intent is to show how offices are the same, regardless of where they’re located.

In its first week on the air, Outsourced attracted a 3.6 in the 18-49 demographic and 7.49 million total viewers. For the timeslot, it ranked in third place in total viewers but was second in the demo, where the numbers really count.

On the downside, Outsourced lost about 20% of its Office lead-in audience in the demo and 12% in total viewers. Also, about 15% of its audience tuned out midway through the episode. Those people gave it a try and probably won’t be back next week.

New shows typically lose about 15% in week two so we’ll have to wait and see how this one’s ratings hold up. For now, things look good for Outsourced.

What do you think? Did you give it a try? Were you offended by Outsourced? Was it different than you expected? Cancel or keep it?

Loved the show!! Good comedy. This will be a hit serial if allowed to continue. No doubt about it. A sitcom that also highlights the cultural aspects of an emerging power. Never know. May come in handy someday.

i used to work in a call center and yes my center was closed and moved to the Phillipines, so yes it did hit a sore spot. but this is the way of the world, but putting that all aside, i loved the show, i looked forward to watching. how can a stupid show like to office stay on so many years and outsourced be canceled what are the exec at NBC thinking??

Somebody pick up this show!!!! Loved watching every episode. This show was a funny topic to discuss the next day. Gupta was our favorite character. Very disappointed to hear it was canceled.

this is awesome show. I absolutely love this show.

This is the funniest show ever! It seems everything these days is about people being “offended” for some reason or other. Laugh, for crying out loud, and get over yourself!

……………………………………. people need to stop getting so offensive about stuff. south park clearly is much more racist than this show yet people still love it. seriously, the people who have issues with this show need to get over it.

Of course they cancelled Outsourced. WHY WHY WHY?? I love this show and all the actors. SOO funny and beautifully filmed. Can some cable network pick it up? Remember when Monk was cancelled? It was picked up by TBS . TBS? Are you listening???

I love this show! My mother loves this show! We have an appointment every Thursday to watch, whether by phone or in person. Only show we ever both really LOVED! I agree the name probably hurt it, but once you watch you get right past that. I make sure to stay up for it but the time slot is a little late.

Outsourced is the funniest show on NBC and possibly all of TV. It was a self-fulfilling prophesy that is would be cancelled when they stupidly moved it to 10:30. I am so sick of every Thursday night becoming Office reruns. Sorry, but Office isn’t funny the first time. NBC – Go screw !!

This show is my only reason for watching prime time TV anymore. If they cancel it, i’m giving up NBC entirely. Television viewers have already been declining for years, and you can add me to the list if this show is not renewed.

I absolutely love this show. I disagree with those people who think its offensive. I’m an Indian myself living in Canada, but I see no harm on either culture looking at it from both standpoints. I really really hope it stays on!

I am Asian and could not stop laughing. It could be a bit racy or stereotyping but if written well, it could be a great hit. Hope it reaches a more global audience.

I absolutely love this show!!!! I work in a call center and talk to outsourced call center employees in India all the time! This show makes the robotic sounding reps I talk to from India almost loveable. It’s funny, that’s the bottom line and I will be very upset if it is cancelled!!!

I agree with nofoldems. It is very funny but airs late that must hurt the ratings. I hope NBC keeps it. I watch it everytime, even when it is past my bedtime.