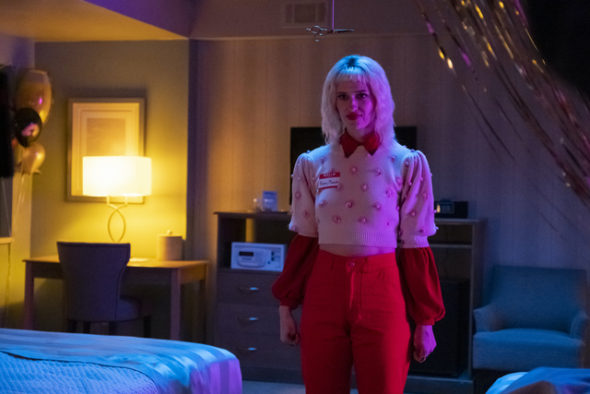 Are fans ready to check out for good? Has the Room 104 TV show been cancelled or renewed for a fifth season on HBO? The television vulture is watching all the latest cancellation and renewal news, so this page is the place to track the status of Room 104, season five. Bookmark it, or subscribe for the latest updates. Remember, the television vulture is watching your shows. Are you?

Airing on the HBO premium channel, Room 104 is an anthology series that takes place in a single room in a typical American motel chain. While the room remains the same, the characters, storyline and even the time period of each episode is different. The genres vary too and include dark comedy, poignant drama, and musical romance.

We don’t have to wonder if HBO will cancel or renew Room 104 for season five. The cable channel has already revealed that season four is the end. Could the show return someday? I’ll update this page with breaking developments. Subscribe for free alerts on Room 104 cancellation or renewal news.

What do you think? Are you sorry that the Room 104 TV show is ending? Would you have watched a fifth season on HBO?