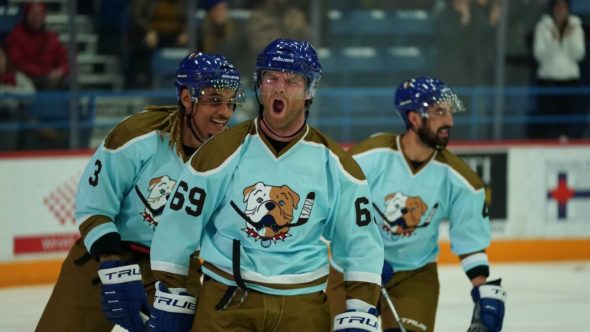 Shoresy is returning for a second season. Crave has renewed the Letterkenny spinoff series in Canada and US viewers will be able to watch the new episodes on Hulu. Production will begin on the six new episodes this spring.

More was revealed about the renewal in a press release.

Lace ‘em up! As revealed today by TSN’s Jay Onrait and SportsCentre, Crave has ordered a second season of the hit original comedy SHORESY. Created by and starring Jared Keeso, and produced by New Metric Media in association with Play Fun Games, the six-episode, half-hour series follows the foul-mouthed, chirp-serving, mother-loving, fan favourite character, Shoresy (Keeso), and the embattled Sudbury Blueberry Bulldogs as they continue their quest to never lose again. Production is set to begin in Sudbury this spring.

A hit with both fans and critics alike, SHORESY was the most-watched Canadian series debut in Crave history, and received rave reviews from The New York Times who regarded the series, “as wild and filthy as its predecessor, absolutely bubbling over with indecency, and outrageousness in all of the best ways;” and The Globe and Mail who said “at last, a real hockey show about real hockey.” A bonafide hit on both sides of the border, Hulu will once again be the exclusive streaming home of SHORESY in the U.S., alongside its wildly popular forerunner, LETTERKENNY.

The Bulldogs are back. #Shoresy Season 2 coming soon. pic.twitter.com/jMba2jXuTb

A premiere date for season two will be announced in the future.

What do you think? Are you excited to see more of Shoresy on Hulu? Have you watched this Letterkenny spinoff series?