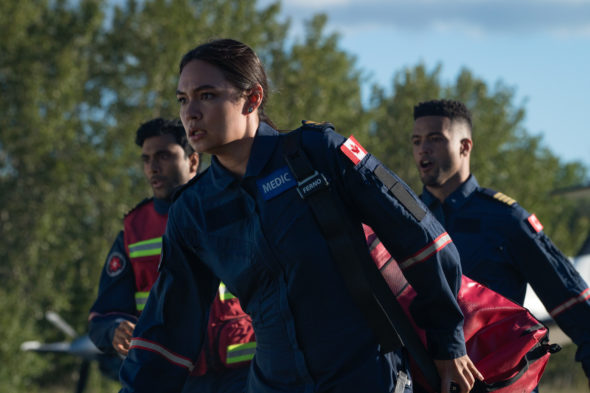 At 20,000 feet in the air, these medical responders have to rely on each other in the first season of the SkyMed TV show on Paramount+. As we all know, the Nielsen ratings typically play a big role in determining whether a TV show like SkyMed is cancelled or renewed for season two. Paramount+ and other streaming platforms, however, collect their own data. If you’ve been watching this TV series, we’d love to know how you feel about the first season episodes of SkyMed here.

A Paramount+ medical adventure drama series, the SkyMed TV show stars Natasha Calis, Morgan Holmstrom, Praneet Akilla, Ace “Aason” Nadjiwan, Mercedes Morris, Thomas Elms, Kheon Clarke, Rebecca Kwan, Aaron Ashmore, and Braeden Clarke. The show follows the triumphs, heartbreaks, and tribulations of budding nurses and pilots as they fly air ambulances to areas in remote Northern Canada Episodes weave together intense character journeys with high-stakes medical rescues. They’re all in over their heads, and on their own, with no one to rely on but each other.

What do you think? Which season one episodes of the SkyMed TV series do you rate as wonderful, terrible, or somewhere between? Do you think that SkyMed on Paramount+ should be cancelled or renewed for a second season? Don’t forget to vote, and share your thoughts, below.

There are no big name actors here but its so well written and acted that I binged all the way through season 1. Would love to see more episodes or more seasons and see what happens to all the dreams the charactors had, whether they achieved them, moved away and never came back etc.

Good series if a bit under budget. Worst aspects are the OBVIOUS short cuts.

THIS IS A GOOD SERIES. But FFS if you don’t have a billion dollars at least spend the $20 extra on simple things

Thoroughly enjoyed this show looking forward to a season 2

Loved this show, praying there is a season 2. I binged watch season one

This show tries to cram to many plotlines together while under developing the characters. The acting feels forced and cringe worthy awkward. Watch this instead of Dramamine works like a charm.