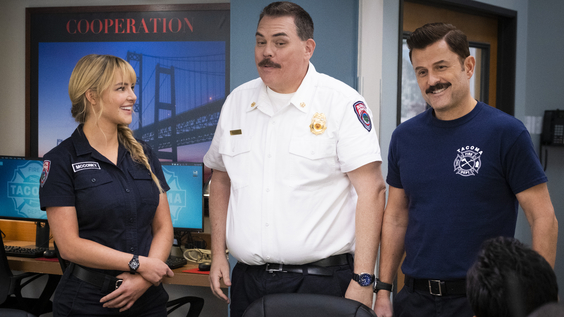 truTV revealed more about the return of the comedy in a press release.

“The third season of truTV’s blazing-hot firefighter comedy Tacoma FD is set to premiere Thursday, September 16, 2021 on truTV. The scripted series returns with 13 episodes as the crew deals with all new shenanigans including quarantines, prank wars, upgrades to Station 24 and the Annual Pickleball Tournament.

Tacoma FD, a Top 10 Comedy on ad-supported cable in 2020, is set in a firehouse in one of America’s rainiest cities. These firefighters keep themselves entertained with creative competitions, friendly first responder rivalries and no shortage of bizarre emergency calls. Chief Terry McConky (Kevin Heffernan) and Captain Eddie Penisi (Steve Lemme) lead the firehouse antics and are joined by an eclectic crew played by Eugene Cordero (Andy), Marcus Henderson (Granny), Gabriel Hogan (Ike), and Hassie Harrison (Lucy).

Tacoma FD is executive produced by Heffernan and Lemme alongside David Miner and Greg Walter from 3 Arts Entertainment as well as Inman Young and Savey Cathey from A24 Studios.”

Check out the trailer for Tacoma FD season three below.

What do you think? Are you a fan of this comedy series? Do you plan to watch season three of Tacoma FD on truTV this fall?

This is my favorite show, BAR-NONE!!! The Broken Lizard guys are fantastic. I’ve been checking constantly to find out when season 3 would be on. Thanks for the update!!!

One of the funniest shows on television in many years. Just hilarious and real. These people are believable.

This is a good show. Why cancel it? Please don’t.

Cancel? Lol it one of the better in it’s genre. Happy

What current shows do you think are funny??