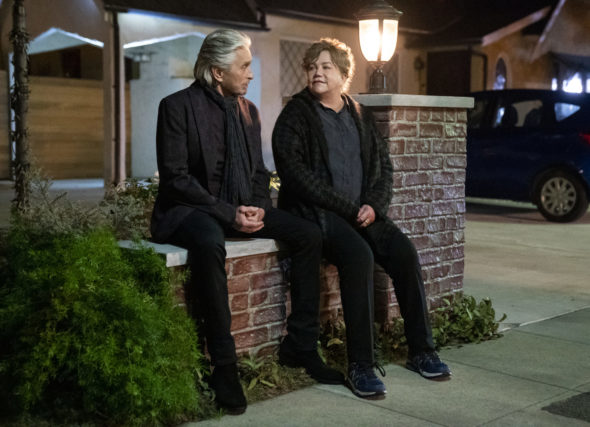 How will Sandy cope without Norman? Has The Kominsky Method TV show been cancelled or renewed for a fourth season on Netflix? The television vulture is watching all the latest cancellation and renewal news, so this page is the place to track the status of The Kominsky Method, season four. Bookmark it, or subscribe for the latest updates. Remember, the television vulture is watching your shows. Are you?

Streaming on the Netflix subscription service, The Kominsky Method stars Michael Douglas, Sarah Baker, Paul Reiser, and Kathleen Turner. Guests include Lisa Edelstein, Emily Osment, Graham Rogers, and Haley Joel Osment. In the third season, acting coach Sandy Kominsky (Douglas) has to navigate aging without his longtime friend Norman Newlander (Alan Arkin) by his side. Life only becomes more complicated with the arrival of Sandy’s ex-wife, Roz Volander (Kathleen Turner). The pair’s famously volatile relationship is further inflamed when she comes to LA to spend time with their daughter Mindy (Baker) and her boyfriend Martin (Reiser). This season deals with money, death, love, murder, and dreams coming true. In other words, the usual.

Unless they decide to publicize viewership, it’s typically difficult to predict whether Netflix will cancel or renew a show like The Kominsky Method for season four. In this case, we already know that season three is the end. Could the show be revived someday? Subscribe for free alerts on The Kominsky Method cancellation or renewal news.

What do you think? Were you hoping that The Kominsky Method TV show would be renewed for a fourth season?

Fourth season? MOST DEFINITELY! Way too good of a story to just stop at three!

Definitely should not be cancelled. The actors are top notch and the plot contains elements we all can relate to.