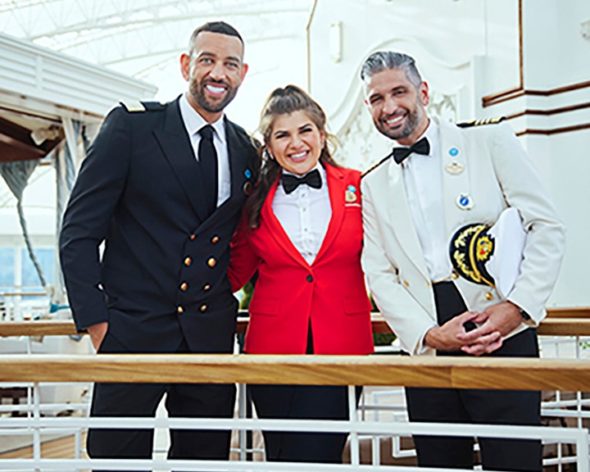 The Real Love Boat is coming to CBS next month, and viewers are now learning more about the crew on board the ship. The new dating reality series is hosted by real-life couple Rebecca Romijn and Jerry O’Connell. There will be 12 singles competing during the month-long cruise.

At least one member of the original Love Boat cast will take part in the new show. Ted Lange can be seen appearing in the trailer.

CBS revealed more about the upcoming series in a press release.

“THE REAL LOVE BOAT announced today three Crew members and twelve Singles joining hosts Rebecca Romijn and Jerry O’Connell on a luxury Princess Cruises ship through the Mediterranean. The series premieres Wednesday, Oct. 5 (9:00-10:00 PM, PT/ET) on the CBS Television Network and will be available to stream live and on demand on Paramount+*.

The ship’s Crew members – Captain Paolo Arrigo, Ezra Freeman (Bartender) and Matt Mitcham (Cruise Director) – play pivotal roles in the matchmaking and navigation of the romantic yet sometimes turbulent waters, just like the beloved original scripted series “The Love Boat.” With over 40 combined years working in the industry, Arrigo, Freeman and Mitcham bring their real-world expertise to help the Singles look for love in this adventure of a lifetime.

Singles experienced in the ups and downs of romance come together on THE REAL LOVE BOAT to find a true love connection while visiting and competing in some of the world’s most beautiful cities, including Barcelona, Marseille, Rome, Santorini, Athens and more. A shoe designer, firefighter, nurse, teacher and landscape architect are among the men and women setting sail on the romantic adventure. From divorce and broken engagements to terrible online dating experiences, being unlucky in love has not discouraged these Singles from seeking true romance.

Throughout the season, Singles embark on destination dates and compete in challenges to test couples’ compatibility and chemistry, while earning valuable rewards. The romantic waters will be tested when new Singles come aboard, and those who don’t find a match will “Shove Off” and be left behind at port. After nearly one month at sea, one winning couple will dock in the final port and take home a cash prize plus a once-in-a-lifetime trip courtesy of Princess Cruises, the series’ exclusive cruise line partner.”

Check out a preview for The Real Love Boat below.

Romance is on the horizon… 🛳❤️

Get ready to board the @realloveboatcbs and find yourself falling in love on the high seas, October 5th at 9/8c on CBS. pic.twitter.com/jw3WDi98f7

What do you think? Do you plan to check out this new dating reality series in October?

What is wrong with this network? They just seem like they don’t give a darn about what they’re putting on the air. current lineup is made up of basically one producer Director making countless number of shows. Which equals garbage when it comes to quality originality. This show just shows that this Netwerk is going to continue to make reality shows that it’s just cheaper and more economical for the network. Read more books it’s healthier for your mind

I can’t wait for this to start airing just so it can get cancelled. It’s just a stupid idea.

ANY remake of “the Love Boat” would be likely to suck dragon ass. A “reality” version is GUARANTEED to do so.

Not sure if I will watch. Usually the remakes are not successful.

Not wasting my precious time on it