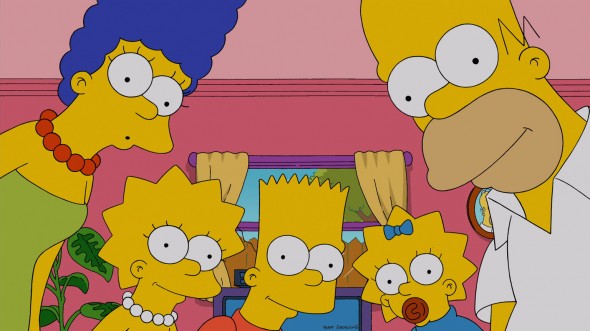 It’s the longest-running American sitcom and it sounds like The Simpsons won’t be ending anytime soon either.

Showrunner Al Jean recently responded to a fan on Twitter and said that favorite bad guy Sideshow Bob had not died and would be returning in season 27.

While he didn’t come right out and say that The Simpsons had been renewed for a 27th season, he did note that, “the simpsons will definitely not end in May 2015. Stay tuned…”

Currently in its 26th season, The Simpsons remains a top show for the FOX network. It’s currently the network’s second-highest rated show with an average 3.0 rating in the 18-49 demographic and 6.45 million viewers.

With the current state of the network’s schedule, there’s no way they wouldn’t bring back one of their top shows, one that the company also owns and profits from in syndication.

The simpsons should never end.

Simpsons should go to season 35 or 40 at most go simpsons !!! Theyll never stop the simpsons have no fears we’ve got stories for years.

Simpsons should have 35 seasons period !

I haven’t watched the show since 1999. It is so past its prime and has been appealing to the lowest common denominator for so long that it doesn’t even matter anymore. The show will probably be on for another 26 seasons. It still scores high on the ratings, and being an animated show, everyone is replaceable

I don’t The Simpsons should be cancelled. It’s one of the best shows Fox will ever have. Ratings are brilliant. I think Fox should keep it on as long as people are watching it. I think Bobs Burgers will be cancelled after this season. The Latest episode had a 0.90 rating (compared to The Simpsons which had a 1.50 rating) which is absolutely terrible. That’s worse than American dad and The Cleveland show ever had. All Fox needs on Sunday next season is Simpsons, Family guy and B99. No need for Mulaney or bobs burgers. I think they should bring… Read more »

Watching the FXX Marathon reminded a lot of people how perfect the first 10 seasons or so were. There are a lot of just plain bad episodes from the more recent seasons but this season (26) has been pretty good so far. I definitely wouldn’t say it’s not funny anymore, and looking at the comments, people who are saying that also say they haven’t watched it in years. Can’t say I blame them for giving up on the show, but at least they are releasing some better episodes. It would be great if they can go out on a high… Read more »

i like the simpsons but its getting to be too much. and season 27 should be its last. i thought that 26 would have been its last season ever but its time for this show to end. but i know it will probably keep going on til at least 30 seasons. but who knows what we think. it will still keep going no matter what we all have to say about it. maybe the creators want to make it to 30 and stop to say hey we have made it this far and it will stop. more than that will… Read more »

The Simpsons / Futurama crossover reminded me of how much more I like Futurama than the Simpsons. I’d torture anyone if it would make them bring back Futurama.

I’ve outgrown the Simpsons decades ago, but if others enjoy it, so be it. At least it still has some occassional humor.
As for the other animated shows on Fox, those should be trashed since that is what they are, trash. Not funny what so ever.

I have not watched the show in over 8 years. But keep on going. Liked it when I watched it.

It’s too bad I have gotten into “Family Guy” and actually like it better than “The Simpsons”. How long do I think “The Simpsons” should run? I believe that season 27 can be the last year for the venerable animated series. I’ll be fine with that.

it should cause its so predictable & getting boring….. its not funny no more

It will end before season 35 at least.

Wonder if The Simpsons is going to reach 30.

MASH had 256 episodes and The Simpsons already has 559. Are you thinking Gunsmoke? That had 635 episodes.

THE SIMPSONS hater won’t be getting his wish.