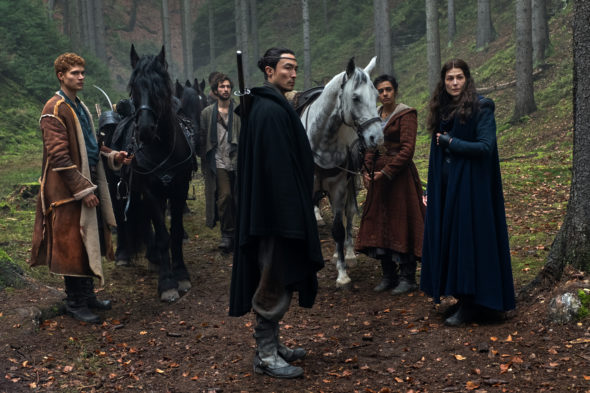 How long will this fantasy tale last? Has The Wheel of Time TV show been cancelled or renewed for a second season on Amazon Prime Video? The television vulture is watching all the latest cancellation and renewal news, so this page is the place to track the status of The Wheel of Time, season two. Bookmark it, or subscribe for the latest updates. Remember, the television vulture is watching your shows. Are you?

Streaming on the Amazon Prime Video subscription service, The Wheel of Time TV show is based on a series of novels by Robert Jordan. It stars Rosamund Pike, Josha Stradowski, Marcus Rutherford, Zoë Robins, Barney Harris, Madeleine Madden, and Daniel Henney. The tale is set in a sprawling, epic world where magic exists and only certain women are allowed to access it. The story follows Moiraine (Pike), a member of the incredibly powerful all-female organization called the Aes Sedai. Starting in the small town of Two Rivers, she embarks on a dangerous, world-spanning journey with five young men and women. One of them is prophesied to be the reincarnation of the Dragon, a powerful being who will either save or destroy humanity.

There’s no need to worry about The Wheel of Time being cancelled after only one season. The fantasy series was renewed for season two well ahead of the series debut. Subscribe for free alerts on The Wheel of Time cancellation or renewal news.

7/23/2022 update: The Wheel of Time has been renewed for a third season by Prime Video.

What do you think? Are you glad that The Wheel of Time TV show has been renewed for a third season? How would you feel if Amazon had cancelled this TV series, instead?

I wish they would cancel it & start over, be true to the source material (books). If you read the books, loved it, fell in love with the world Robert Jordan created, you can only be disappointed in this series.

Wasn’t at all afraid of that. Rather I was hoping for it to BE cancelled. This isn’t Wheel of Time. It’s a mediocre fan-fic set in the same world. I have no idea why “adaptation” insists on “narrative restructuring”. There’s a reason people love Wheel of Time. Don’t change it. Many fans wanted to see the book come to life on screen so that people could enjoy the same story we enjoyed in print. Instead we got a bad teen drama with thematic apathy and a complete failure to reflect the awesome characters of the novels. I’m personally looking forward… Read more »

Loved The Wheel! We all need some fantasy in our lives and this one is excellent. I hope the series continues.

I can only HOPE that it does get canceled after the second season so that maybe in my lifetime someone will dig it back up and at least honor the spirit of the books. I’m a realistic person I know vast cut and truncated plot lines HAVE to happen. This however was gutting of what made the books .

So glad it has been renewed. I LOVED the books and I LOVE the series!!!

I have always been a fan for Midevil shows and after the disaster ending of game of thrones im glad that the wheel of time has sparked my interest. So far so good and I do hope for future seasons to follow..