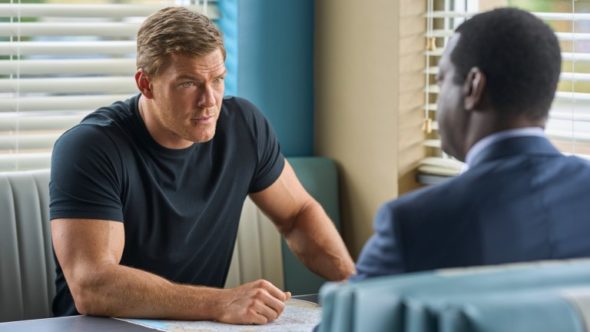 How long will Jack’s journey continue? Has the Reacher TV show been cancelled or renewed for a second season on Prime Video? The television vulture is watching all the latest cancellation and renewal news, so this page is the place to track the status of Reacher, season two. Bookmark it, or subscribe for the latest updates. Remember, the television vulture is watching your shows. Are you?

Streaming on the Amazon Prime Video subscription service, the Reacher TV show is based on novels by Lee Child. The first season stars Alan Ritchson, Malcolm Goodwin, Willa Fitzgerald, Chris Webster, Hugh Thompson, Maria Sten, Harvey Guillén, Kristin Kreuk, Currie Graham, Marc Bendavid, Willie C. Carpenter, Maxwell Jenkins, and Bruce McGill. The story revolves around veteran military police investigator Jack Reacher (Ritchson) who has just recently entered civilian life. He’s a drifter, carrying no phone and the barest of essentials as he travels the country and explores the nation he once served. When Reacher arrives in the small town of Margrave, Georgia, he finds a community grappling with its first homicide in 20 years. The police immediately arrest him and eyewitnesses claim to place Reacher at the scene of the crime. While he works to prove his innocence, a deep-seated conspiracy begins to emerge, one that will require Reacher’s keen mind and hard-hitting fists to combat. One thing quickly becomes clear — they picked the wrong guy to take the fall.

Unless they decide to publicize viewership, it is difficult to predict whether Prime Video will cancel or renew Reacher for season two. However, given that this show is based on a popular series of novels, I would be very surprised if it weren’t renewed. I’ll keep my ears open and an eye out for news, and will update this page with breaking developments. Subscribe for free alerts on Reacher cancellation or renewal news.

2/7/2022 update: Reacher has been renewed for a second season on Prime Video.

What do you think? Are you glad that the Reacher TV show has been renewed for a second season? How would you feel if Prime Video had cancelled this TV series, instead?

Reacher is a great series so far, and followed the book very closely and well worth the watch.

Reacher is best show I’ve seen in a long time.

I read that Prime has already renewed it for season 2,