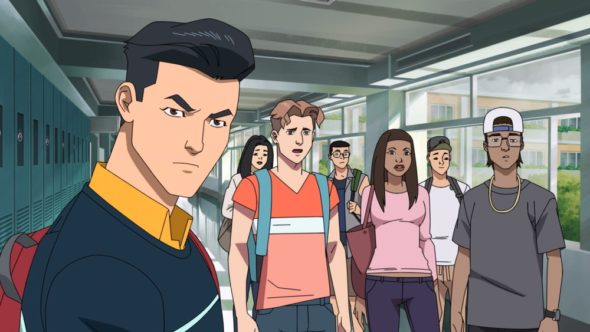 Can you always tell the heroes from the villains? Has the Invincible TV show been cancelled or renewed for a second season on Amazon Prime Video? The television vulture is watching all the latest cancellation and renewal news, so this page is the place to track the status of Invincible, season two. Bookmark it, or subscribe for the latest updates. Remember, the television vulture is watching your shows. Are you?

Streaming on the Amazon Prime Video subscription service, the Invincible TV show is based on the Skybound/Image comic book of the same name by Robert Kirkman, Cory Walker, and Ryan Ottley. The voice cast includes Steven Yuen, J.K. Simmons, Sandra Oh, Seth Rogen, Gillian Jacobs, Andrew Rannells, Zazie Beetz, Mark Hamill, Walton Goggins, Jason Mantzoukas, Zachary Quinto, Mahershala Ali, Melise, Kevin Michael Richardson, Grey Griffin, Khary Payton, Mahershala Ali, Clancy Brown, Nicole Byer, Jeffrey Donovan, Jonathan Groff, Jon Hamm, Djimon Hounsou, and Ezra Miller. In the story, Mark Grayson (Yeun) is a regular guy whose father is the most powerful superhero on the planet, Omni-Man (Simmons). As Mark develops powers of his own just ahead of his 17th birthday, he enters into his father’s tutelage and discovers that his dad’s legacy may not be as heroic as it seems.

Unless they decide to publicize viewership, it is difficult to predict whether Amazon Prime Video will cancel or renew Invincible for season two. Given that animation is typically less expensive to produce than live-action series and this one comes from the creator of The Walking Dead, I think this show will be renewed. I’ll keep my ears open and an eye out for news, and will update this page with breaking developments. Subscribe for free alerts on Invincible cancellation or renewal news.

4/30/21 update: Invincible has been renewed for a second and a third season.

What do you think? Are you glad that the Invincible TV show has been renewed? How would you feel if had Amazon cancelled this TV series, instead?