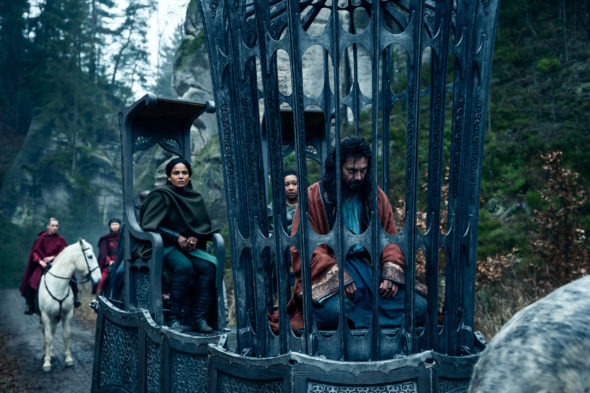 An Amazon Prime Video fantasy series, The Wheel of Time TV show is based on the series of novels by Robert Jordan. It stars Rosamund Pike, Josha Stradowski, Marcus Rutherford, Zoë Robins, Barney Harris, Madeleine Madden, and Daniel Henney. The tale is set in a sprawling, epic world where magic exists and only certain women are allowed to access it. The story follows Moiraine (Pike), a member of the incredibly powerful all-female organization called the Aes Sedai. Starting in the small town of Two Rivers, she embarks on a dangerous, world-spanning journey with five young men and women. One of them is prophesied to be the reincarnation of the Dragon, a powerful being who will either save or destroy humanity.

What do you think? Which season one episodes of The Wheel of Time TV series do you rate as wonderful, terrible, or somewhere between? Are you glad that The Wheel of Time has been renewed for a second season on Prime Video? Don’t forget to vote, and share your thoughts, below.

I get really tired of the myriad of people who read books and then complain when it is put to film because it doesnt follow the book. I did not read the book & loved the series! I may just read the books now (and I wont complain that the books arent following the show).

The issue isn’t that the writes/producers did not follow the books, it is that the changes that they made brake the logic of the world that they are creating. As an example, Menetheran fell thousands of years ago, this is true in the books and in the show. The Two Rivers is built on old Menetheren, also true in both. The Two Rivers is a small farming/herding village, known for their tobac and wool. Also true in both. It is remote and far from the ruling cities, not visited by tax collectors and from time-to-time peddlers come through, but otherwise… Read more »

Rosamunde Pike is utterly compelling as Moiraine Sedai and beautifully balanced by Daniel Henny as Lan. Their fight choreography at the end of episode 1 was spectacular.

Stand out moments: a pregnant woman fighting while in labour; Nynaeve saving Lan and discovering her power at the end of Ep4; Loial’s incredible courtesy; Sophie Okenedo as Siuan Sanche delivering a nuanced, clever character.

Best episode: 6 The Flame of Tar Valon. White Tower sumptuousness, politics, colour, character development and the big reveal of Moraine and Siuan’s relationship. Loved how that was handled. Kudos.

The actors and the acting in ‘The Shannara Chronicles’ was way better than ‘WOT’, ‘so far’ (apart from Rosamund Pike as Moiraine). It got 90 to100 percent approval in Rotten Tomatoes, yet it was cancelled after season 2. The likely outcome is that ‘WOT’ will go the same way as The Shannara Chronicles’, neither of them created anything close to the same interest as ‘GOT’, not even close. ‘GOT’ was an adaption but neither ‘WOT’ or ‘The Shannara Chronicles’ could be considered as such; simple because in both these cases, the shows creators have chosen to abandon the Authors narratives… Read more »

It needs to be rebooted. I understand an adaptation would require trimming of content. However, half of the show the show is completely made up. Another quarter of the show is tweaked in ways that cause logical inconsistencies. As someone who read the books and has been looking forward to seeing an adaptation for years, this series was a major disappointment.

The Wheel of Time series strength was never it’s technical writing or its dialogue. Rather, the biggest strength of the series was the world building and plot elements as well as conceptual characterization of people(even if sometimes poorly executed). Unfortunately, subtle aspects of the world building that have important ramifications seem to have been forgotten or ignored by the writers. For example, making Egwene into a Ta’veren while on the surface seeming like a positive change for equality actually has the negative effect of hurting her character agency. Ta’veren are more intrinsically tied to the pattern and pre-destined fate then… Read more »

I am a fan of the book series. That said, this is a darn good adaptation of a sprawling fantasy series that is known (notorious?) even among die-hards for pages and pages of long, detailed, often-times plodding, boring and even repetitive exposition. There are entire books that even super-fans refer to as “The Slog” because of how many words they use to describe so little action. The show is doing a fantastic job of condensing all of that encyclopedic information into compelling scenes that, while technically not in the books serve to lay the groundwork of building Jordan’s expansive world… Read more »

Season two is already shooting. The books could never come close to a full and proper adaptation. Some book readers will cling to the images they have of what the show should be, but ultimately the adaptation is decent & for those unfamiliar with the source material it seems it is quite successful for bringing newbies to the story.

So, you’re saying it would be impossible to make movie versions of ..Lord of The Rings?

Oh, but it’s already been DONE.

If Peter Jackson can turn four DENSE novels into a runaway success, then Wheel of Time can do the same with a talented Director.

I am a fan of the book series. That said, this was the worst book-to-film adaptation in recent memory. If you’re a fan, trust me… you’re not getting the Game of Thrones treatment here. The director and writers have taken major liberties with the story and characters – to the point where the reason for many of their later actions no longer will make sense. I was really looking forward to this series. After watching a few episodes I can say that the writing here is abysmal. There was nothing the actors could do to save it – I don’t… Read more »