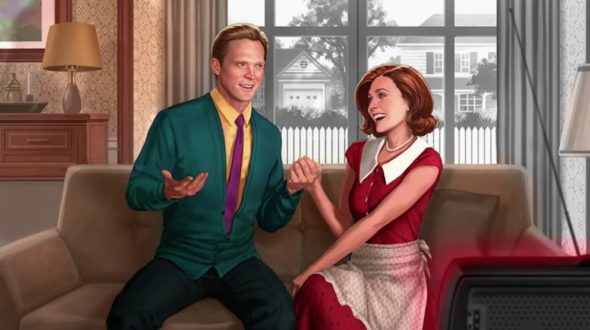 WandaVision will soon land on Disney+, and there is big news for the upcoming Marvel series. The show will have a different theme song for each installment, fitting the theme of the episode.

The series will put superheroes Vision (Paul Bettany) and Scarlet Witch/Wanda Maximoff (Elizabeth Olsen) in different sitcom settings for each installment. Set after the events in the Avengers: Endgame movie, we find the two are living the ideal suburban life in the town of Westview, trying to conceal their powers. But, as they begin to enter new decades and encounter television tropes, the couple suspects things are not as they seem.

The duo behind the music of Frozen, Robert Lopez and Kristen Anderson-Lopez, created the music featured in Wandavision. Lopez said the following about working on the series, per Collider:

“WandaVision is such a cool, strange, one-of-a-kind project. When the director, Matt Shakman—an old friend from my college days—pitched it to us, we didn’t have to think about it. We loved the bright feeling of American sitcoms mixed with the deep sense of unease the story had, and it was a really inviting challenge to help set that tone.”

A trailer for the series has also been released.

What do you think? Are you planning to check out the WandaVision TV show on Disney+?

How stupid making into sitcom ridiculous made for action show marvel comics.