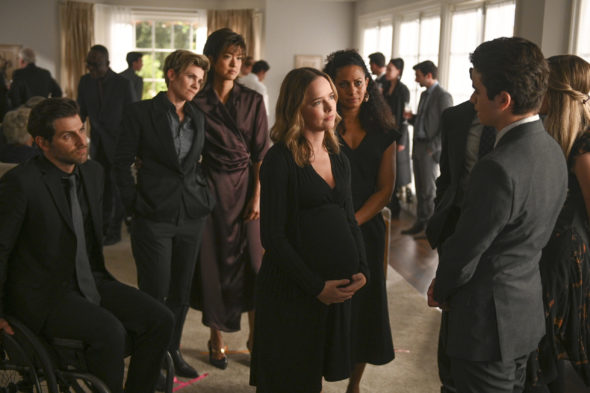 A Million Little Things is returning for its fifth and final season next month, and DJ Nash, the creator of the ABC series, has revealed why the series is ending now and teased what viewers can expect to see.

An extended family drama series, A Million Little Things stars David Giuntoli, Romany Malco, Allison Miller, Christina Moses, Grace Park, James Roday Rodriguez, Tristan Byon, Lizzy Greene, and Chance Hurstfield. Set in Boston, this series revolves around a tight-knit group of friends who are each feeling stuck in different aspects of their lives. Their worlds are rocked when one of them unexpectedly takes his own life and this horrific event serves as a wake-up call to the others. In season four, the group comes together once again in aspirational and uplifting ways as they help each other through life’s unpredictable curveballs. Friendship isn’t a big thing — it’s a million little things.

Though ABC only announced in November that A Million Little Things was ending, Nash reminds us that, the plan was always to (hopefully) run for five years, per Variety:

“We’re not a hospital show where new interns can come in. We’re about a group of friends that are real and a lot of things have happened to this group of friends. I didn’t want us to become the issue-of-the-week show. I knew from the beginning it was five years. I wasn’t as public about it because people want it to go longer, but this is the right time.”

The fifth season will begin with the group coming together for the funeral of a loved one who has died unexpectedly. Another character will also pass away during the season, though Nash wouldn’t give any clues about who that might be. The season will also feature appearances by some familiar faces, including Delilah Dixon (Stephanie Szostak) and, via flashbacks, Jon Dixon (Ron Livingston).

A Million Little Things returns to ABC with its final season premiere on February 8th.

What do you think? Will you be sad to see this drama come to an end? Did you want more seasons?

Very sad to see this show end! Loved most of the characters and the friendship they have which you don’t see in todays times! There’s not such on t.v but stupid reality shows

Yes it has keeps you on the edge of your seat. I love the show and it will be sad to see it go.

I will be sadden to see it end but hopefully I can always bingev watch it on Hulu .Nonetheless it was a great show .

So sad. One of my MUST WATCH SHOW COME ON BACK

So sad this is the final season! Have been watching since I got hooked during the first episode. A great show with relevant storylines.

Sorry to see it end, it’s a great show, but IMO a good show knows when it’s time to wrap up. I hate when good shows go bad just because they’re trying to draw it out. Tell a good story and go out on a high note.

I enjoy this show so much. There is always someone you can relate to which is great. This show has so much to give the audience. Hate to see it end.

I’m sad that this show is ending but an glad we got the full story the creator intended. I’m scared to watch after the teasers in the article that 2 deaths happen in this final season and am hoping my guess isn’t correct based on which of the cast members are in the photo shown with the short. They said Delilah would guest star so that leaves 2 primary cast that aren’t in the photo.

The picture shows a very pregnant Maggie so this somewhat makes me think that they are at Gary’s viewing/funeral/celebration of life etc…..The other unexpected death is more than likely pointing to Sophie. Which would explain Delilah coming back, Jon flashbacks and Maggie looking very sad talking with Danny. However, I don’t see Rome in this photo either…..I’m hoping his depression didn’t win the fight like it did with Jon. I guess we’ll have to wait and see and sadly seeing this great show end.

I love the show and sad to see it end. It started when i lost someone to suicide and i guess i connected.

I’m so bummed about the show ending! I just can’t believe that it’s been 5 years! There are so many shows on tv that don’t have nearly the substance that this show has.

sorry to see it go

I always appreciate knowing when things are ending. The fact that the creator had a vision and has followed it to its natural conclusion is great. Too many times, the creative staff bend to ratings and network desires making the future storylines go down unrealistic paths.