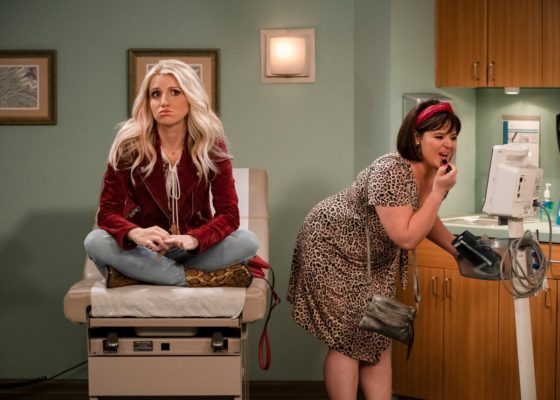 Are Drew and Gina a true match? Has the B Positive TV show been cancelled or renewed for a second season on CBS? The television vulture is watching all the latest cancellation and renewal news, so this page is the place to track the status of B Positive, season two. Bookmark it, or subscribe for the latest updates. Remember, the television vulture is watching your shows. Are you?

Airing on the CBS television network, the B Positive TV show stars Thomas Middleditch, Annaleigh Ashford, Kether Donohue, Sara Rue, Izzy G., and Terrence Terrell. The story revolves around a man with B-positive blood who needs an organ transplant and finds an unlikely match. Drew (Middleditch) is a therapist and newly divorced dad who is in need of both a new kidney and a social life. He runs into Gina (Ashford), a rough-around-the-edges former acquaintance from his past who volunteers one of her own kidneys. Together, Drew and Gina form an unlikely and life-affirming friendship, as they begin a journey that will forever affect both of their lives.

The first season of B Positive averaged a 0.56 rating in the 18-49 demographic and 4.66 million viewers. Find out how B Positive stacks up against other CBS TV shows.

Will CBS cancel or renew B Positive for season two? This comedy series comes from Chuck Lorre and Marco Pennette. Both have a long list of credits but Lorre in particular has had great success producing successful CBS comedies. The ratings aren’t great. I am confident that the network will renew either B Positive or United States of Al, but probably not both. I’ll update this page with breaking developments. Subscribe for free alerts on B Positive cancellation or renewal news.

5/16/21 update: B Positive has been renewed for a second season on CBS.

What do you think? Are you glad that the B Positive TV show has been renewed for a second season? How would you feel if CBS had cancelled this TV series, instead?

Please renew this show. In my opinion the best new show this season. Looking forward to Season 2

My husband & I look forward to watching B Positive every week. The cast is FANTASTIC, the show is FUNNY, but also at the same time projects a powerful message. I think it helps people see what others go through, how much we take for granted, and realize how luck they are to be healthy.

I love this show. They need to renew it

Love this show. Season 1 was the best.

Renew . It started slow but has developed into a good show

Renew BPositive! It keeps me interested and makes me smile. Looking forward to season #2!

Don’t watch. Most people own a remote, I know I do. If I do not like a show after I watch it a couple of times I just erase off my DVR without watching it. Everyone has different tastes.

Renew B Positive it is fhn

Please renew B Positive… we so enjoy!!

Please renew B positive! It covers an important topic with humour, which we can all use. Love Gina!