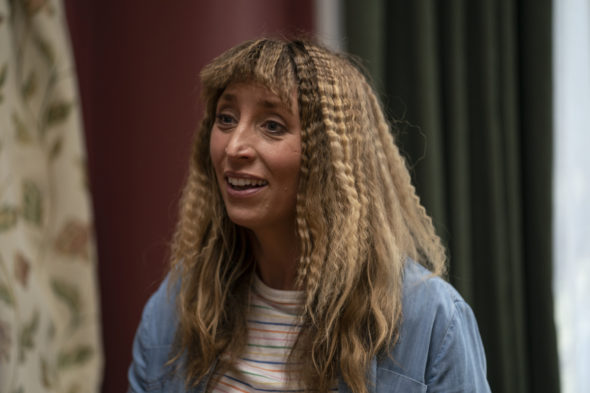 Can Miri truly put the past behind her? Has the Back to Life TV show been cancelled or renewed for a third season on Showtime? The television vulture is watching all the latest cancellation and renewal news, so this page is the place to track the status of Back to Life, season three. Bookmark it, or subscribe for the latest updates. Remember, the television vulture is watching your shows. Are you?

Airing on the Showtime cable channel in the United States, Back to Life was created by Daisy Haggard and is written by Haggard and Laura Solon. The show stars Haggard, Geraldine James, Richard Durden, Adeel Akhtar, Jo Martin, Jamie Michie, Christine Bottomley, Juliet Cowan, and Imogen Gurney. After 18 years behind bars, Miri Matteson (Haggard) returns home and stumbles back into adult life in the coastal town she once knew. The mystery of her past continues to follow her and she forms a friendship with Billy (Akhtar), who cares for the elderly woman next door. The second season picks up three weeks after the first season’s finale and Miri continues to reconcile with her past while trying to assimilate and make a new life for herself post-incarceration.

The second season of Back to Life averaged a 0.01 rating in the 18-49 demographic and 33,000 viewers in the live+same day ratings (includes all DVR playback through 3:00 AM). Compared to season one, that’s down by 78% in the demo and down by 77% in viewership in the live+same day ratings (including DVR playback through 3:00 AM). While these numbers don’t include further delayed or streaming viewing, they are a very good indicator of how a show is performing, especially when compared to others on the same channel. Though other economic factors are involved, the higher-rated shows usually get renewed and the lower-rated ones get cancelled. Find out how Back to Life stacks up against other Showtime TV shows.

Will Showtime cancel or renew Back to Life for season three? The show originates from BBC in the UK so it likely doesn’t cost Showtime much to air. The traditional ratings in the United States are truly tiny but, if BBC renews the show for a third year, I think Showtime will run it. Haggard has said that she has a clear idea for season three so I think there’s a good chance Back to Life will be renewed overseas. I’ll update this page with breaking developments. Subscribe for free alerts on Back to Life cancellation or renewal news.

What do you think? Do you hope that the Back to Life TV show will be renewed for a third season? How would you feel if BBC or Showtime cancelled this TV series, instead?

Wish I could send a love letter to SHOWTIME. Please, please PLEASE bring us a third season of “Back to Life.” Much love.