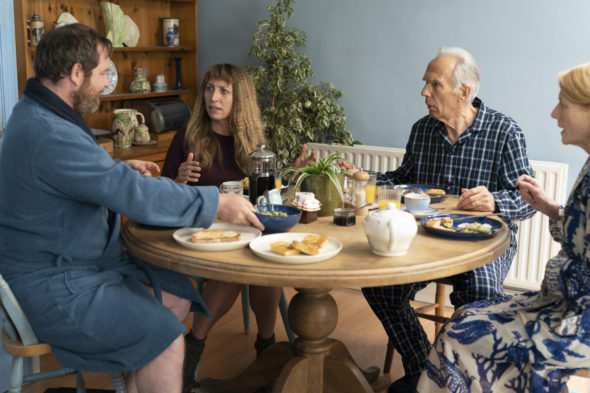 Will Miri’s life get better in the second season of the Back to Life TV show on Showtime? As we all know, the Nielsen ratings typically play a big role in determining whether a TV show like Back to Life is cancelled or renewed for season three. Unfortunately, most of us do not live in Nielsen households. Because many viewers feel frustrated when their viewing habits and opinions aren’t considered, we invite you to rate all of the second season episodes of Back to Life here.

A Showtime dark comedy series produced by BBC, Back to Life was created by Daisy Haggard and is written by Haggard and Laura Solon. The show stars Haggard, Geraldine James, Richard Durden, Adeel Akhtar, Jo Martin, Jamie Michie, Christine Bottomley, Juliet Cowan, and Imogen Gurney. After 18 years behind bars, Miri Matteson (Haggard) returns home and stumbles back into adult life in the coastal town she once knew. The mystery of her past continues to follow her and she forms a friendship with Billy (Akhtar), who cares for the elderly woman next door. The second season picks up three weeks after the first season’s finale and Miri continues to reconcile with her past while trying to assimilate and make a new life for herself post-incarceration.

What do you think? Which season two episodes of the Back to Life TV series do you rate as wonderful, terrible, or somewhere between? Do you think that Back to Life should be cancelled or renewed for a third season on Showtime? Don’t forget to vote, and share your thoughts, below.