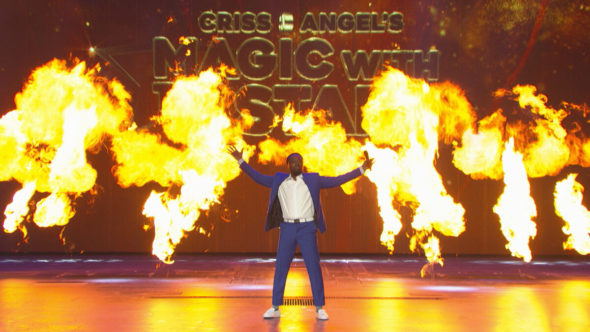 The golden wand prize is up for grabs on The CW’s Criss Angel’s Magic with the Stars TV show. As we all know, Nielsen ratings typically play a big role in determining whether a TV show like Magic with the Stars is cancelled or renewed for season two. Unfortunately, most of us do not live in Nielsen households. Because many viewers feel frustrated when their viewing habits and opinions aren’t considered, we invite you to rate all of the first season episodes of Magic with the Stars here.

A CW competition reality series, the Criss Angel’s Magic with the Stars TV show is hosted by Eddie Griffin and is judged by Criss, Loni Love, and Lance Burton. In each episode, two celebrities train with professional magicians and compete to create a show-stopping series of magic performances. The celebrity competitors are tasked with mastering three major categories of magic, which they perform in front of a team of judges. Only the highest-scoring celebrities will be invited back for the season finale, where they will compete for the golden wand. Guests include Tara Lipinski, Randy Couture, Brec Bassinger, Matt Walsh, Donnie Osmond, Debbie Gibson, Corbin Bleu, Miles Brown, Maksim Chmerkovskiy, Omarion, Lolo Jones, Frankie Muniz, Ginuwine, Flavor Flav, Johnny Weir, and Jeff Timmons.