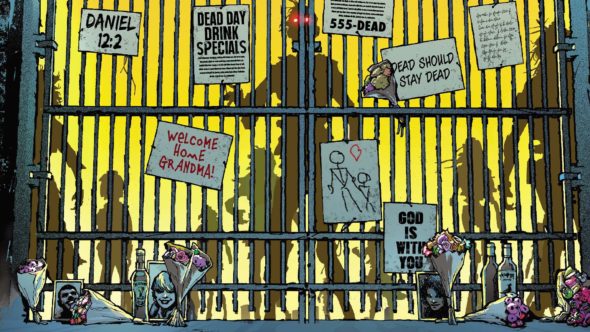 Dead Day is coming to Peacock. The streaming service has ordered the new supernatural series, which reunites Julie Plec and Kevin Williamson – the team behind The Vampire Diaries. Based on the Aftershock comic-book series by Ryan Parrott, the show revolves around characters as they make their way through one day a year when the dead come back.

“Peacock announced today the straight-to-series order of supernatural drama series DEAD DAY, based on the bestselling AfterShock comic-book series created by Ryan Parrott, from producers Julie Plec (The Vampire Diaries, The Originals, Legacies) and Kevin Williamson (The Vampire Diaries, Dawson’s Creek, The Following), who will serve as co-showrunners, writers and executive producers.

DEAD DAY follows an ensemble of characters as they navigate the annual “dead day,” when for one night the dead come back to complete unfinished business — be that to celebrate a night back on earth or to torment the living. (The hit comic-book series was recently greenlit for Volume 2).

Plec and Williamson are reuniting after their last collaboration creating the long-running, fan-favorite hit TV series The Vampire Diaries.

“Dead Day combines an exciting, high-concept premise with relatable characters and real emotion,” said Lisa Katz, president scripted content, NBCUniversal Television and Streaming. “We jumped at the opportunity to work with Julie Plec and Kevin Williamson, who not only have tremendous individual track records with their high-quality storytelling, but have created magic together before.”

“Julie Plec and Kevin Williamson are each a powerhouse unto themselves, so we couldn’t have been more excited when they told us they wanted to team up again,” said Vivian Cannon, EVP, Drama Development, Universal Television. “Dead Day will be everything Julie and Kevin’s audiences love about their work – emotional, unexpected and totally bingeable!”

“We have been looking for a project to do together and Dead Day has all the ingredients we love as storytellers. Love, death, thrills and tears — and we know Susan Rovner and her team at Peacock is the perfect fit for this project,” said Julie Plec and Kevin Williamson.

“We realized because of Dead Day’s unique, universally appealing concept that this AfterShock Comic would capture the audience’s imagination worldwide. And none of this would be possible without this recognition from our amazing partners: Julie Plec, Kevin Williamson, Universal Television, Peacock and Ryan Parrott, the creator of Dead Day,” said AfterShock Media’s Lee and Jon Kramer.

A cast and premiere date for the series will be announced later.

What do you think? Do you plan to check out Dead Day on Peacock?