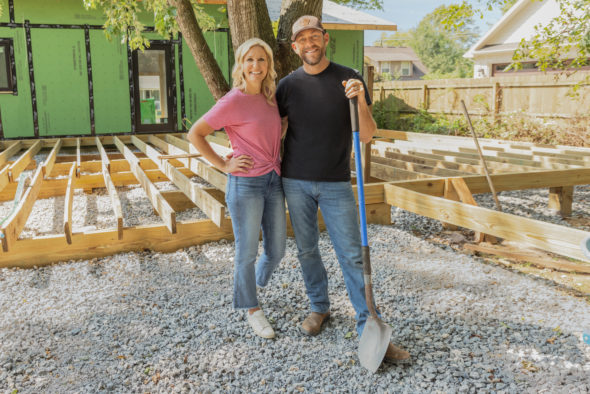 Fixer to Fabulous is returning for a fourth season. HGTV has renewed the series for 16 new episodes which will begin airing on the cable channel in late fall. Spouses Dave and Jenny Marrs will return to renovate homes while managing their farm and raising five kids.

“Breakout series Fixer to Fabulous, starring renovation and design experts Dave and Jenny Marrs who overhaul historic homes in Northwest Arkansas, has been renewed by HGTV for a new season. The series, which attracted more than 31 million viewers during its previous run, spotlights the husband-wife team as they renovate homes while raising five young children and managing their family farm. Jenny, the creative influence behind their personalized renovations, specializes in designing spaces that are warm and welcoming for families. Dave tackles construction and custom-built furniture with skill and confidence that stems from his passion for reviving old homes. The new 16-episode season is slated to premiere in late fall 2022.

Fans can stream past seasons of Fixer to Fabulous and spinoff series Fixer to Fabulous: Welcome Inn on discovery+. They also can interact with both series at HGTV.com/FixertoFabulous and on social media using #FixertoFab, as well as follow Dave (@dave.marrs) and Jenny (@jennymarrs) on Instagram.”

A premiere date for the return of the renovation series will be announced later.

What do you think? Are you a fan of Fixer to Fabulous on HGTV?

I love this show the best out of all of the shows Dave and Jenny feel real like they are good friends of mine. I’ve never met them,but they seem to be great people!!!

I love fixer to fabulous – such a talented couple and loving family. I live in Australia and very interested in the houses jenny and Dave fix up, also love the scenes that include their cute kids!