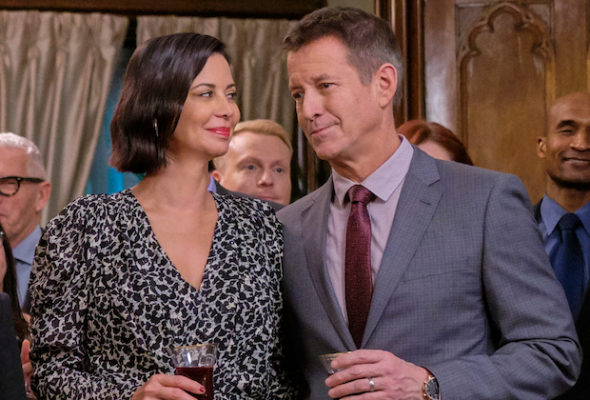 Good Witch was cancelled by Hallmark recently, and the stars of the series – Catherine Bell, Kat Barrell, and James Denton – have reacted to the news that there won’t be an eighth season. Bell appeared in the Good Witch series and films for 13 years, but that is all coming to an end soon. The series finale for the drama will air on July 25th at 9 PM, and it is titled “The Wedding.”

Per Deadline, the Hallmark Channel episode sees the Merriwick cousins getting ready to face the mysterious force putting their family legacy at risk while changes are in store for others.

Check out the posts from Bell and Kat Barrell from their Instagram accounts below.

Denton said the following in a statement:

“It would be unseemly to complain about your show being cancelled after seven seasons, and I won’t. I’ve been very fortunate to have been on other long-running series, but Good Witch was special. The fans were so devoted to the show and I’m disappointed for them, but I hope they know how much the actors appreciated their vocal support. The cast was the nicest collection of wildly talented people I’ve ever been around. The producers treated us extremely well, and I’m happy to still have two movies to make with the network so I’m not saying goodbye to the Hallmark audience yet.”

What do you think? Were you surprised that the Good Witch TV show was cancelled by Hallmark? Do you plan to watch the finale later this month? Would you have watched season eight?

And with the cancelation comes the removal of the Hallmark Crown… I know, 10 episodes in today’s world, can be a real challenge but the Good Witch was possibly the last of the Family oriented series.. Good luck to all the actors/actresses, you’ve been great.. Oh ya, good luck Hallmarkwith your decision…

Will miss good witch very much. One of my picks I watched. What a shame.

So sad to see it’s cancelled! Why is it always the good shows!!

I am so sad to see one of my favorite Hallmark shows cancelled. It could have gone on forever for me. I think there are still a lot of stories to be told, starting with Abigail and Donovan getting back together. Sure was surprised to see they weren’t the objects of the title “The Wedding”. I will continue to watch the reruns during the day. I hope the network and producers change their mind and bring it back.

I am so sad tonite thinking of tomorrow night being the last episode of my favorite show!! THE GOOD WITCH!
Wanted to share my sadness with the many other loyal fans whom I know feel the same way !
Asking again to Hallmark to give us a
Halloween movie PLEASE!

I think it is a bad move on Hallmarks part to cancel this great show. I love the show and all the characters. Hallmark is making a big mistake!!!!!!

I cant believe they cancelled. It was my great escape from work and covid and anything else that was not good . I loved the show and all its characters. Im extremely disappointed with Hallmark.

I am so sad about this news. I so look forward to each new season. I turn to Good Witch and “the postables” to add to my happiness. I feel that we all need that at this time. This is a huge loss and a bigger gap in the Hallmark lineup.

To put it mildly I’m disappointed, I would have a few choices words for those that though it a good idea to cancel The Good Witch!! I hope Hallmark feels the loss where it counts…. In its viewership! Hope they come to their sense and reboot in the near future! The Good Witch fan base are much like that of the Gilmore Girls , it is passed down through the generations. They have unceasing complained and demanded it to be brought back and revisited! Till they had no choice but to pick it up again many years later! So too,… Read more »

I am very saddened by the sudden cancellation of The Good Witch. With all that is happening in our world today, all the violence and killings, so much cruelty and unkindness, a pandemic, watching The Good Witch has always brought joy, happiness, love, kindness and hope. Canceling this wonderful, magical, heart warming program just puts another crack in an already broken heart of America

Good witch has been a wonderful series. I hope that there can be more series like this one. We are dealing with a very strenuous time right now. People are so separated. They are having disagreements far to often. The world needs more positivity towards the each other. We are all one in the sense that we do not need to pass judgement on other people who are in anyway different from each other. We all have one thing in common we bleed red.