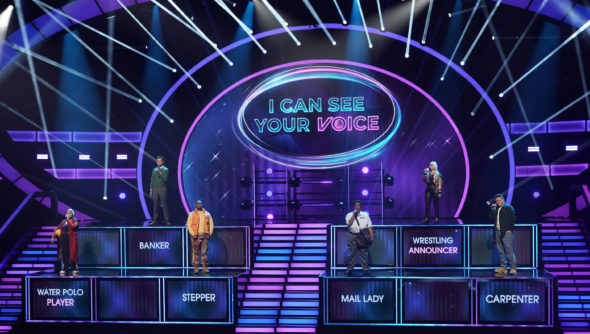 Who’s the best guesser? Has the I Can See Your Voice TV show been cancelled or renewed for a third season on FOX? The television vulture is watching all the latest cancellation and renewal news, so this page is the place to track the status of I Can See Your Voice, season three. Bookmark it, or subscribe for the latest updates. Remember, the television vulture is watching your shows. Are you?

Airing on the FOX television network, the I Can See Your Voice TV series is hosted by Ken Jeong and also features Cheryl Hines and Adrienne Bailon-Houghton as regular panelists. All three are joined by guest celebrity detectives. The panel tries to help a contestant guess the good and bad singers, without ever hearing them sing a note. With $100,000 on the line and the celebrity panel by their side, the contestant will attempt to weed out the bad “Secret Voices” from the good, based on a series of clues, interrogation, and lip-synch challenges. New this season, contestants are given one chance to use the “Golden Mic,” which grants them advice from one secret mystery celebrity. In the end, the singer whom the contestant picks will reveal if they are good or bad in a duet performance with a famous music artist, resulting in an amazing musical collaboration or a totally hilarious train wreck. Guests in season two include Bow Wow, Cheyenne Jackson, Jewel, Jason Mraz, Joel McHale, Lil Rel Howery, Kelly Rowland, Kelly Osbourne, and Brian Austin Green.

The second season of I Can See Your Voice averaged a 0.37 rating in the 18-49 demographic and 2.08 million viewers in the live+same day ratings (includes all DVR playback through 3:00 AM). Compared to season one, that’s down by 66% in the demo and down by 48% in viewership in the live+same day ratings (including DVR playback through 3:00 AM). While these numbers don’t include further delayed or streaming viewing, they are a very good indicator of how a show is performing, especially when compared to others on the same channel. Though other economic factors are involved, the higher-rated shows usually get renewed and the lower-rated ones get cancelled. Find out how I Can See Your Voice stacks up against other FOX TV shows.

I Can See Your Voice Cancellation & Renewal Related Links

What do you think? Do you hope that the I Can See Your Voice TV show will be renewed for a third season? How would you feel if FOX cancelled this TV series, instead?

I love this show please bring it back!!!

This is my favorite show. I found it late, after the season was over, on You tube and I’ve watched it over and over again. Praying it returns

I enjoyed the show very much. I hope there’s a third season.
Thank you for considering it.

Thank you for helping out many people. This is a star opportunity for people to change their life around. Please don’t cancel. Let more opportunities come. You all are doing great and making changers in people lives.

Please keep this show on air.

DO NOT CANCEL! I love this show and I’m always looking forward to watching it. I don’t watch Masked Singer anymore. My only comment is I wish Ken Jeong could be funny or crazy even once. He was funny in Masked Singer and in Let’s Hear your Voice he doesn’t get to be as crazy as I expected him to be. If time is the problem, shorten the Bad Singer’s song. We don’t need to hear bad voices longer. Or no need for the Golden Mike. You already have great judges. Think To Tell the Truth or Family Feud. The… Read more »

PLEASE RECONSIDER CANCELING I CAN SEE YOUR VOICE. I JUST FOUND AND LOVE IT! I DON’T THINK YOU ADVERTISED/NOTIFIED EVERYONE ENOUGH! SO SAD IT’S A SHOW THE HOLE FAMILY CAN WATCH. ADVERTISE!!!!!!