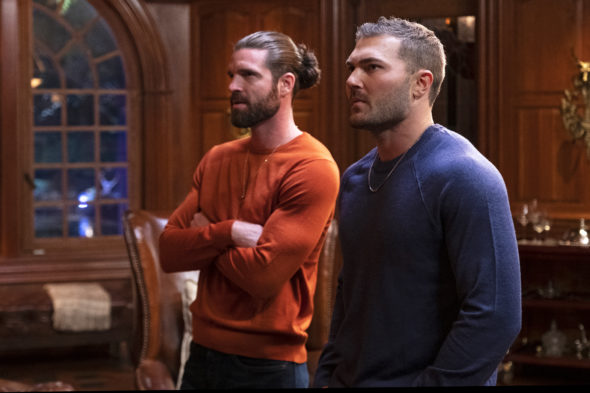 Would you chose either Joe? Has the Joe Millionaire: For Richer or Poorer TV show been cancelled or renewed for a second season on FOX? The television vulture is watching all the latest cancellation and renewal news, so this page is the place to track the status of Joe Millionaire: For Richer or Poorer, season two. Bookmark it, or subscribe for the latest updates. Remember, the television vulture is watching your shows. Are you?

Airing on the FOX television network, the Joe Millionaire: For Richer or Poorer TV show is a variation on the Joe Millionaire program which aired for two seasons in 2003. This version of the reality series features two incredible single men as they meet various prospective mates. One’s a millionaire while the other is definitely not. More than a dozen women will date both of them, but they’ll have no idea which Joe is rich. As love connections are made and each guy finds his perfect match, the women must ask themselves what is more important… love or money? The “Joes” are bachelors Kurt F. Sowers, a 32-year-old construction manager and CEO from Charlotte, North Carolina, and Steven McBee, a 27-year-old farmer and CEO from Gallatin, Missouri. The participants are guided by Martin the Butler (Martin Andrew).

The first season of Joe Millionaire: For Richer or Poorer averaged a 0.33 rating in the 18-49 demographic and 1.60 million viewers in the live+same day ratings (including DVR playback through 3:00 AM). While these numbers don’t include further delayed or streaming viewing, they are a very good indicator of how a show is performing, especially when compared to others on the same channel. There can be other economic factors involved in a show’s fate, but typically the higher-rated series are renewed and the lower-rated ones are cancelled. Find out how Joe Millionaire: For Richer or Poorer stacks up against other FOX TV shows.

Will FOX cancel or renew Joe Millionaire: For Richer or Poorer for season two? This show is likely relatively inexpensive to produce and has a good amount of name recognition with the public. The ratings aren’t great but, I think it’s still got a chance of being renewed. I’ll update this page with breaking developments. Subscribe for free alerts on Joe Millionaire: For Richer or Poorer cancellation or renewal news.

What do you think? Do you hope that the Joe Millionaire: For Richer or Poorer TV show will be renewed for a second season? How would you feel if FOX cancelled this TV series, instead?

Yes i do. Wish the audiance didnt know who the millionaire either. Also they can do a jane millionaire too. Also how we follow up on the couples lives after the show

I love Joe Millionaire FROP. Both Steven and Kurt are likable men who seem truly interested in finding the woman most suited for their wife. I am quickly replacing The Bachelor with Joe as my favorite reality show. Think you’ve got a winner here.

I too am replacing the bachelor- I LOVED joe millionaire FROP – some drama but not crazed, and a promise ring to try and make it work in the real world instead of a engagement ring. And the series was short and sweet and I really hope there is a season 2!

Steven is handsome + kind but a mama’s boy from a small town, which can make a relationship challenging. He’s also very afraid women will only like him for his money. It’s obvious, so he has to avoid talking about anything that indicated he’s wealthy. Owning a big farm + being well educated with an MBA, may be a clue to some of the women, but many think Kurt the Contractor is the millionaire. He’s not.

I’d really like to follow this show. (But l think it would be even more intriguing if the TV audience also didn’t know which one is ‘richer Or poorer’ “.)