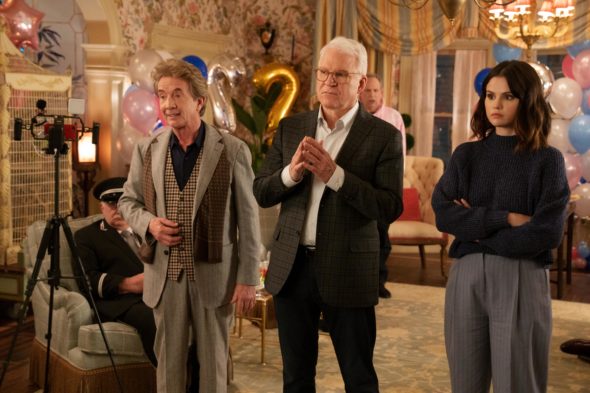 Charles, Oliver, and Mabel are back in the thick of it. Has the Only Murders in the Building TV show been cancelled or renewed for a third season on Hulu? The television vulture is watching all the latest cancellation and renewal news, so this page is the place to track the status of Only Murders in the Building, season three. Bookmark it, or subscribe for the latest updates. Remember, the television vulture is watching your shows. Are you?

Streaming on the Hulu subscription service, the Only Murders in the Building TV show was created by Steve Martin and John Hoffman. It stars Martin, Martin Short, Selena Gomez, Aaron Dominguez, and Cara Delevingne. Recurring and guest players include Michael Rapaport, Da’Vine Joy Randolph, Jackie Hoffman, Amy Schumer, and Shirley MacLaine. The story follows three strangers who share an obsession with true crime and suddenly find themselves wrapped up in one in the Arconia building in New York City. A former actor, Charles-Haden Savage (Martin) became famous for playing a detective in a police series. Oliver Putnam (Short) is a struggling Broadway director and Mabel Mora (Gomez) is renovating an apartment for her aunt. When a grisly death occurs inside their exclusive Upper West Side apartment building, the trio suspects murder and employs their precise knowledge of true crime to investigate the truth. In season two, following the shocking death of Arconia Board President Bunny Folger (Jayne Houdyshell), Charles, Oliver, and Mabel race to unmask her killer. However, three complications ensue — the trio is publicly implicated in Bunny’s homicide, they are now the subjects of a competing podcast, and they have to contend with neighbors who all think the trio committed murder.

7/12/22 update: Only Murders in the Building has been renewed for a third season by Hulu.

Only Murders in the Building Cancellation & Renewal Related Links

What do you think? Are you glad the Only Murders in the Building TV show has been renewed for a third season? How would you feel if Hulu had cancelled this TV series, instead?