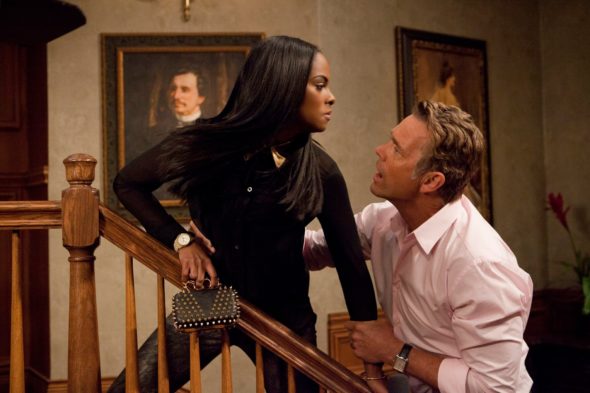 Temptation Tuesdays are returning for the last time on OWN. The cable channel has announced that the final eight episodes of The Haves and the Have Nots will debut on Tuesday, June 1st, at 8/7c. After airing the first eight installments of season eight, OWN announced the show would be coming to an end in May. A series finale date has not yet been officially revealed but, it looks like the series will wrap on July 20th with its 196th episode.

A primetime soap, The Haves and the Have Nots stars John Schneider, Tika Sumpter, Angela Robinson, Renee Lawless, Crystal Fox, Peter Parros, Tyler Lepley, Gavin Houston, and Aaron O’Connell. The drama centers on the complicated dynamic between the Cryer, Harrington, and Young families of Savannah, Georgia. In season eight of this drama series from Tyler Perry, Judge Cryer (Schneider) and his rich friends are all finding out what happens when personal flaws go unchecked. Karma has not been kind to the elite one-percenters.

The eighth season of The Haves and the Have Nots averages a 0.18 rating in the 18-49 demographic and 1.07 million viewers in the live+same day ratings. Compared to season seven, that’s down by 28% in the demo and down by 19% in viewership.

What do you think? Do you enjoy The Haves and the Have Nots TV series? Are you disappointed that there won’t be a ninth season or, is this the right time to end this soapy drama?

Sad to see the show end

It’s time for this to come to an end. In the beginning the show was great; however, the writing became redundant. Candace and Veronica were doing the same things over and over and never suffered any consequences. The show in my opinion was no longer interesting. My favorite was If loving you is wrong. That’s the show I hated to see end.

I loved this series. All of the actors were wonderful and talented♥️
I will miss talking to my friends about the craziness of VERONICA
For me, this series could have gone on forever- but all good things must come to an end. Congratulations on a show well done

I really hate that the show is ending and I wish another network would pick up the show. Tyler Perry’s really talented, but should really look into hiring additional staff to assist him with the show. HAHN is one of my favorite shows. It seems like all the good shows are canceled. Didn’t really like how If You Loving You or Too Close To Home ended…

Mr. Tyler Perry You need to take a break and hire writers to keep HAHN on tv or OWN. I am writing scripts for the show to send you weather you like it or not. HAHN is a good show. During the pandemic a lot of people sort of fell apart and that might of cause viewers to not tune in. Reconsider please!

Can’t end with the fire at Jeffery’s dinner date, give us a better ending Tyler Perry, PLEASE?

Don’t worry, that wasn’t the last episode. That was the end of the mid season. There are 8 more episodes after that (5 have been shown already). I’m sad to see it go but I hope somebody beats the tar out of Veronica.,

I think it’s a damn shame all the good black shows they take away off air from us they need to Stop!and let us enjoy us give our people back our pleasure of entertainment you Demons , and to say this last thing Why you still want us not to have a piece of America also We! built it our sweat and Blood

It was and still is a great show. I’m sad to see it go. My wife started watching and later she hooked me with it. I hope it’s picked up by another network.

I’m so sad that the HAHN are going off. I’ve watched this show from the beginning. Will miss the drama, love and mystery that went on during the show. I wish everyone love and blessings. Love you Tyler Perry.

I am so sorry that the show is ending. Tuesdays are for my sister and I. No more Temptation Tuesdays. I will truly miss the show.