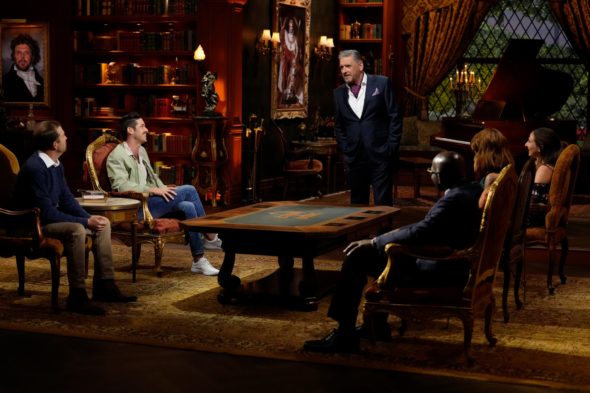 The game is over. ABC has reportedly cancelled The Hustler TV series so there won’t be a third season.

A trivia game show, The Hustler TV series is hosted by Craig Ferguson. Each episode of the show follows five contestants as they collaborate to correctly answer a series of 10 trivia questions that are worth $10,000 each. Their goal is to build the amount of money in a collective prize pot that grows with each correct answer. The catch is that one of the five contestants, aka the Hustler, already knows the correct answers because of their personal experiences or interests. Throughout each episode, two contestants are anonymously eliminated by the Hustler. The remaining three players must collectively decide which one of them is the secret Hustler. If the two regular contestants are correct, they split the prize pot that could be worth over $100,000. If the two are wrong, the Hustler takes home the full cash reward.

Airing on Thursday nights, the second season of The Hustler averages a 0.29 rating in the 18-49 demographic and 1.74 million viewers in the live+same day ratings (includes all DVR playback through 3:00 AM). Compared to season one, that’s down by 44% in the demo and down by 40% in viewership in the live+same day ratings (including DVR playback through 3:00 AM).

The show aired for 19 episodes across two seasons, both during the 2020-21 television season. Season two was one of the lowest-rated ABC shows last summer. Variety was the first to report the cancellation.

What do you think? Have you enjoyed The Hustler TV series? Are you sorry that the show has been cancelled and won’t have a third season on ABC?

I am sadden that the show has been canceled. It was a very entertaining show. Craig Ferguson made the show. ABC’s demographics should have included seniors. My senior friends and I looked forward to Thursday nights and The Hustler!

I really enjoyed The Hustler and host Craig Ferguson. I’m sad it was canceled.

What a shame! This is one of the most entertaining shows out there. Big mistake to cancel this show.

What the heck ABC?? The Hustler was the BEST show you had on last year! Extremely disappointed in the “people” who decided to cancel. Perhaps ABC needs new “people”!!

that’s too bad-it had a different and imaginative concept.

My wife and I love this show. It was fun trying to figure out who the Hustler was. I think she had a better record of getting it right. We’ll miss it a lot. I hope ABC reconsider their decision & bring it back!

We as a family (grandma, Mommy, Daddy, 13 year old girl, 10 year old boy. We loved watching this show together. I felt it was hard to track when it was going to be on. Would be on for 2 weeks then off. Then back again for 3 weeks and then gone for months??????
We will miss this game show

It was an excellent show. Very similar to the game Clue. Hate to see it go!

The Hustler was one of my wife and my favorite shows! It also had one of the most magnificent show sets on TV. It did stimulate thought and analytical thinking, which may have taxed too many sleepy couch potatoes brains. I hope that another network picks it up!

One ofthe best shows ,sorry to see it go

The Hustler was a wonderful concept and had an outstanding host. But ABC , a network that presents “The Kardashians: An ABC News Special” saw fit to ax it. It’s too much to hope that it might surface elsewhere so farewell to a different and refreshing kind of game show.

I enjoyed this show. Very sad and mad that it’s cancelled!!

They should really rethink this one. It was soooo good. Please reconsider this!!!!

YES!! How can we promote for another, smarter network to pick it up??!!

I liked this show please bring it back!!!

We think it Sucks that The Hustler was canceled, we Absolutely Love the show and Craig Ferguson. Maybe Game or GSN will start airing it, we would even enjoy watching reruns. Too Sad that it’s gone, should have recorded the episodes