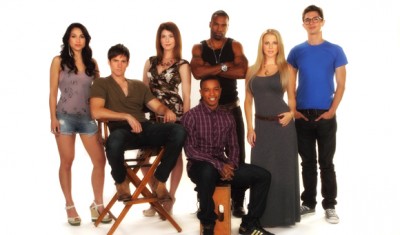 Bell Media has reportedly cancelled The LA Complex after two seasons on the air. The low-rated drama may see a third season on The CW however.

Six episodes were ordered for the first season and then, before they had aired here in the States, Bell ordered a second season of 13 episodes. According to THR, the ratings for season two were down in Canada so the broadcaster has opted not to order any more.

“Unfortunately the performance of the show was not strong enough for Much to be able to order another season,” said Vice-President, Communications for Bell Media Scott Henderson.

The CW is apparently still considering a third season of LA Complex and is having discussions with Epitome Pictures about continuing the show. Based on LA Complex’s poor ratings on The CW, a new deal doesn’t sound very realistic but you never know. We’ll keep you posted.

During the summer, CW President Mark Pedowitz said, “We’re actually big fans of the show… The show actually does really well for us digitally and in the social media space… There’s a sense of reality of what it’s like to try to make it in the Hollywood area in the entertainment industry; [Creator] Marty Gero is just fantastic. I hope to be in business with him for a long time.”

What do you think? Should The CW order season three of The LA Complex?

Please bring back the show! Its the one show that I actually looked forward to watching every week. Plus the last show that aired left so many things left unfinished it left us hanging!

Please bring the show back!!! This show was better than sex on a stick! Great story lines! Amazon acting! I can’t take another bad girls, basket ball, real house hookers of any city or state! This show had substance! This show for my areolias perky!! I am shocked at the ratings bein low because let me tell you, I damn near failed a few semesters watching this show…. It had to make tough decisions either school or LA complex episodes, and I did what any respectable college student would do!!… I choose the episodes… Don’t make my judgements to not… Read more »

This show was fantastic and out-of-the-box. I felt like I was watching the “real” struggles of Hollywood artisits that we do not get to see. All the charcters did a phenomenal job. Please bring all of the cast members back for another season.

Bring it back! I love it!

bring it back..i love the show. its more real than any show about trying to make it in Hollywood.

I was able to just see two episodes before the end. I’ve been looking for the show ever since! I just found out today that the show was dropped. Shame! I really enjoyed what I saw. Good acting; good story lines! To me, it seemed a very important piece of work for many reasons. I know the ratings were down, but, this kind of program takes awhile to catch on. PLEASE BRING IT BACK, OR SEE IF OWN OR TVONE WOULD TAKE IT.
THE SHOW IS JUST TOO GOOD TO LET GO, TOO GOOD!

This show is the best! It’s so full of drama & excitement! I have people I know in Florida hooked & I live in Pennsylvania! Please bring this back on !!!

I think they should bring the show back!!! It was a really good show, was looking forward to the new season! They took ringer off. That was a good show also!

Pls bring it back… I have to see what happening.. The last season end with me wanting to watch more.

I hope LA Complex comes back with season 3, 4, and 5. I recently ran across the series and REALLY enjoyed it. I found myself watch multiple episodes back to back. I never knew this show was airing. I am not a huge tv watcher, but this is one of those shows I would definitely make time more. It was well written and and nice blend of actors!

Who cares about ratings!This show is one that I couldn’t wait to see what was going to happen next.We have NEVER seen two black gay guys on television. Making out.This show give you the behind the scenes of reality shows,the reality that there are gay rappers, and how there are children raising children. I really do believe if the world see season three, the L.A. Complex fever will catch!!

They have to renew this show for another season! I wish a bigger network would pick it up so people would actually KNOW about it!! I only ended up watching it when I found it on iTunes and now I’ve watched them all obsessively. It’s a great show!!

I love this show! LA Complex is the type of show everyone can relate to because the characters, are interesting and realistic. Each week I looked forward to watching this show and even turned others onto it. I know a ‘Kaldrick King’ and ‘Abby’….it’s like watching people I know with way more drama. So, if this show is cancelled, I believe its full potential as a great show will never be realized and those of us who enjoyed the show will be left empty handed. CW, please work out a deal to keep this show going!

Bring the show back. Can’t Canada have something to enjoy the US doesn’t care to watch.

This show is awesome and by the way it was one of the best 1 hour program shows ever.

The thing that I thought made the show so great was that there was several different situations going on in the show. They would go back and forth between everyone.

At least in my opinion if you want to cancel the show think again I think they better put a series finale at least. This sucks.

Oh most definitely this show must come back. They left us on the edge of our seats at the end of season 2! Shame on Bell Media. They own too much in Canada and have a business mindset leaving no room for creative writing and acting. Those TV ratings they are talking about is going to be the joke of this decade. Nobody is watching TV anymore, what are they thinking?! Everything is online. LA Complex became popular online, not on TV. It’s so different for the regular TV programming, it probably confused those grandmas with remote controls. At the… Read more »