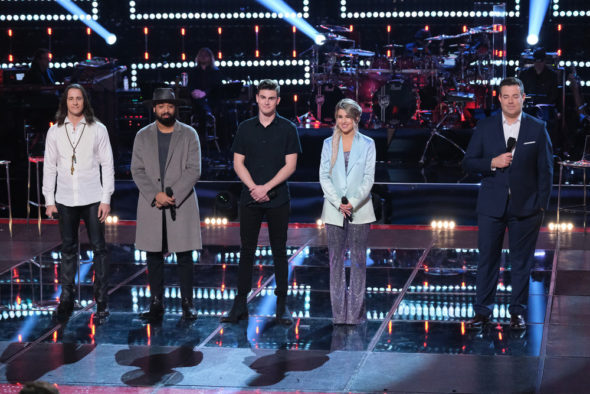 The Voice is going live next week. The competition series has figured out a way to finish out season 18 remotely. It sounds like they are taking a page out of the playbook of American Idol, which returned with new episodes on April 26.

NBC revealed more about the live broadcasts of The Voice in a press release. Check that out below.

“For the first time ever, four-time Emmy Award-winning series “The Voice” will broadcast live shows remotely beginning the week of Monday, May 4 (8:00-10:00 p.m. ET/PT) on NBC.

· Carson Daly will host the live rounds from a soundstage without a live audience in front of the iconic red “Voice” chairs. The four superstar coaches will remote in from their home locations to provide artist feedback. Kelly Clarkson will broadcast from her ranch in Montana, Blake Shelton from his home in Oklahoma and Nick Jonas and John Legend from their homes in Los Angeles.

· The Top 17 artists will perform for America’s vote from 17 different towns across the country. They will take us into their homes and other meaningful locations to showcase their originality and connect with audiences on a more personal level than ever before. Viewers will see the preparation process that goes into each performance. Leading up to the Top 17 performance show, the coaches held remote mentoring sessions with their artists to plan all musical elements including song selection, vocals and arrangement. During this process, the artists were provided with wardrobe as well as guidance on choreography and art direction to enhance their home performances. Additionally, artists received production kits with state-of-the-art camera and audio equipment to capture their performances.

· The live shows will provide viewers an authentic peek into the coaches’ home lives as they prepare to shoot from home and coach their artists remotely.

· The Voice will capture live moments, interactions and signature coach banter during the broadcast via online videoconference. Additionally, the coaches and artists will utilize laptops during their coaching sessions as they prepare for their performances and capture remote content each week.

· Despite the physical distance that separates the coaches and artists during these mentoring sessions, audiences will get a closer look than ever before at the intimate coach-artist relationship in their home environments as the coaches not only guide the artists through the technical aspects of their performance but also provide personal mentorship as they navigate the pressures of the competition.

· “Reinventing the live shows has allowed us to create innovative ways to bring The Voice to life in a fresh and intimate way,” said Audrey Morrissey, “Voice” Executive Producer and Showrunner. “It has been an incredible team effort with the coaches, artists and their loved ones being involved in the process. With Carson at the helm from the stage, we are excited to share a unique ‘Voice’ experience that will feel both new and familiar.”

· For Monday performance episodes, all interactions between the coaches, artists and host will be recorded live-to-tape, and artist performances will be pre-taped. Viewers will vote for their favorite performances on Mondays via the overnight vote. On the Tuesday results shows, the artists will learn live and in the moment if they will compete for the Instant Save. America will also have the chance to participate in the remote live shows on a new level on Tuesday nights by voting in real-time to determine which artist will advance to the Top 9 from the Instant Save.

· The Monday, May 4 broadcast will open with a special uplifting performance by music icon and Season 18 Mega Mentor James Taylor. Taylor will perform with the remaining artists who he mentored during the Knockout Rounds. Then, Carson Daly will reveal which of the four artists competing in the first-ever Four-Way Knockout was voted through by America, and the artist will earn a spot in the Top 17 with their original team. The Top 17 artists will perform in front of the coaches and America for their chance at a spot in the Top 9.

· On Tuesday, May 5 (8:00-9:00 p.m. ET/P), four artists, one from each team, will be revealed as safe by America’s votes. Each coach then selects an additional artist to move forward. The artist with the next highest overnight votes from each team will compete in the Wildcard Instant Save for the last spot in the Top 9.

· This season, The Voice is averaging a 1.8 rating in adults 18-49 and 10.4 million viewers overall in “live plus seven day” Nielsens, with the current cycle’s premiere growing to a 3.7 in 18-49 and 14.8 million viewers with digital and linear delayed viewing to date. The Voice is a top-15 primetime entertainment show this season in both 18-49 and total viewers, and is the #2 most-watched alternative series on television. It’s also a powerful presence on social platforms — season to date through the end of the first quarter, “The Voice” has accumulated the #1 most total fans across the “big four” social platforms (Facebook, Twitter, YouTube, Instagram) among all broadcast alternative series (32.6 million, Source: ListenFirst Media, LF // TV UNIVERSE // EPISODIC, 9/23/19-3/31/20, Total Fans, Brand Type: TV Shows, Broadcast, Reality).”

What do you think? Are you excited for the live shows of The Voice?