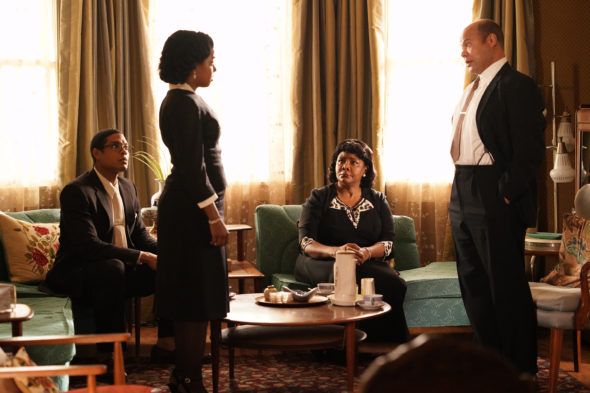 Are there more true stories worth telling in this format? Could the Women of the Movement TV show be renewed for a second season on ABC? The television vulture is watching all the latest cancellation and renewal news, so this page is the place to track the status of Women of the Movement, season two. Bookmark it, or subscribe for the latest updates. Remember, the television vulture is watching your shows. Are you?

Airing on the ABC television network, the Women of the Movement TV show is based on a true story and stars Adrienne Warren, Tonya Pinkins, Cedric Joe, Ray Fisher, Glynn Turman, Chris Coy, Carter Jenkins, and Julia McDermott. In 1955, Mamie Till-Mobley (Warren) risked her life to find justice after her son Emmett (Joe) was brutally murdered in the Jim Crow South. Unwilling to let Emmett’s murder disappear from the headlines, Mamie chose to bear her pain on the world’s stage, emerging as an activist for justice and igniting the Civil Rights movement as we know it today.

The first season of Women of the Movement averaged a 0.43 rating in the 18-49 demographic and 3.10 million viewers in the live+same day ratings (including DVR playback through 3:00 AM). While these numbers don’t include further delayed or streaming viewing, they are a very good indicator of how a show is performing, especially when compared to others on the same channel.  Find out how Women of the Movement stacks up against other ABC TV shows.

Will ABC renew Women of the Movement for season two? The network is promoting this as a limited series with a set ending. ABC could order a second season that tells another true story but, given the ratings, I suspect episode six will be the end of the show. I’ll update this page with breaking developments. Subscribe for free alerts on Women of the Movement cancellation or renewal news.

What do you think? Do you hope that the Women of the Movement TV show on ABC will be renewed for a second season, potentially highlighting another true story?

The telling of this story is more important today with this divided country.

Very interesting show… I am thoroughly enjoying it. Very Sad but keeps your interest.

I think more people need to watch it!!!! They may learn something.