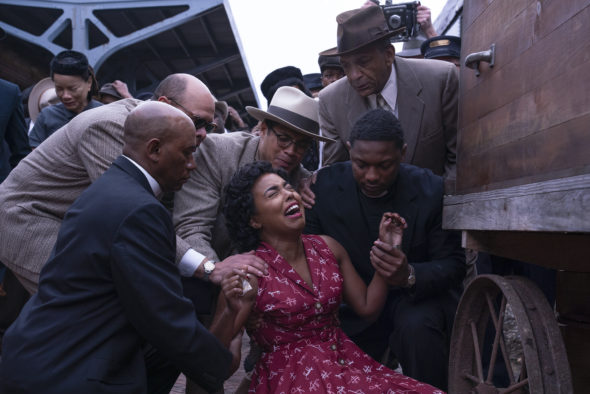 Will we see another true story highlighted by the Women of the Movement TV show on ABC? As we all know, the Nielsen ratings typically play a big role in determining whether a TV show like Women of the Movement is renewed for season two (possibly with a different story). Unfortunately, most of us do not live in Nielsen households. Because many viewers feel frustrated when their viewing habits and opinions aren’t considered, we invite you to rate all of the first season episodes of Women of the Movement here.

An ABC drama series, the Women of the Movement TV show is based on a true story and stars Adrienne Warren, Tonya Pinkins, Cedric Joe, Ray Fisher, Glynn Turman, Chris Coy, Carter Jenkins, and Julia McDermott. In 1955, Mamie Till-Mobley (Warren) risked her life to find justice after her son Emmett (Joe) was brutally murdered in the Jim Crow South. Unwilling to let Emmett’s murder disappear from the headlines, Mamie chose to bear her pain on the world’s stage, emerging as an activist for justice and igniting the Civil Rights movement as we know it today.

I loved every episode! I cried during 2nd and 3rd episode! I just couldn’t hold it back. It’s so real!! And the emotion it shows is powerful! Wow!!
This show is all everyone has talked about in the last few weeks! Everyone I know said great things about how good it was.

Why not renew this is the real question here? we want more!! Give it to us!

PLEASE FINISH THIS SERIES .. IT IS AWESOME

They need to play it again on regular TV. We don’t have internet

I think the women of the movement is a good show. I like it because it’s real and it tell the truth about how people treat each. I would watch this show because it’s a good show to watch on abc. Remember always be kind to each and not mean.