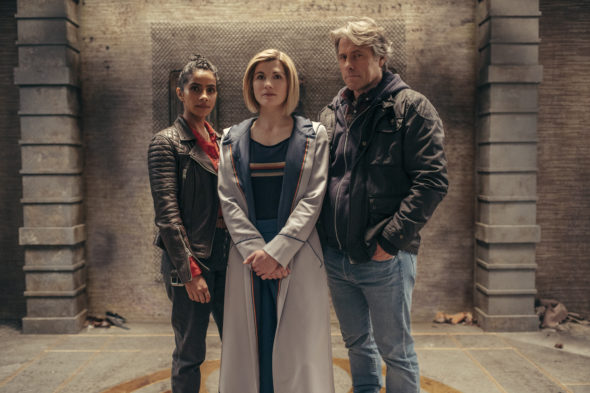 Will the first female Doctor go out with a bang? Has the Doctor Who TV show been cancelled or renewed for a 14th season on BBC and BBC America? The television vulture is watching all the latest cancellation and renewal news, so this page is the place to track the status of Doctor Who, season 14. Bookmark it, or subscribe for the latest updates. Remember, the television vulture is watching your shows. Are you?

Airing on the BBC America cable channel in the United States, the 13th season of the Doctor Who revival stars Jodie Whittaker as the Thirteenth Doctor, an alien Time Lord from the planet Gallifrey. The Doctor travels through time and space in the TARDIS, which appears to be a British police box on the outside, with traveling companions Yasmin Khan (Mandip Gill) and Dan Lewis (John Bishop). Jacob Anderson recurs. Guest stars in season 13 include Robert Bathurst, Thaddea Graham, Blake Harrison, Kevin McNally, Craig Parkinson, Sara Powell, Annabel Scholey, Gerald Kyd, and Penelope Ann McGhie.

On BBC America, the 13th season of Doctor Who averages a 0.08 rating in the 18-49 demographic and 334,000 viewers. Compared to season 12, that’s down by 44% in the demo and down by 35% in viewership in the live+same day ratings (including DVR playback through 3:00 AM). While these numbers don’t include further delayed or streaming viewing, they are a very good indicator of how a show is performing, especially when compared to others on the same channel. There can be other economic factors involved in a show’s fate, but typically the higher-rated series are renewed and the lower-rated ones are cancelled. Find out how Doctor Who stacks up against other BBC America TV shows.

Will BBC America cancel or renew Doctor Who for season 14? This show remains a successful franchise and originates in the UK so, as long as it’s renewed there, it will have a home in the United States. Chris Chibnall is leaving as showrunner after the 13th season. Russell T Davies is returning as showrunner for at least the 14th season so, we know that Doctor Who has been renewed. I’ll update this page with breaking developments. Subscribe for free alerts on Doctor Who cancellation or renewal news.

What do you think? Are you glad that the Doctor Who TV show has been renewed for a 14th season? How would you feel if BBC and BBC America cancelled this TV series, instead?

I dispute the “successful” claim. Ratings have been in a freefall since 2018 (actually 2017) with only a few blips to show otherwise. And like or hate the current Doctor, the fact is she has failed to retain viewers and win those back who were either turned off by Capaldi or turned off by the choice of 13th Doctor. And of those who remained, many quit because of the retcon that destroyed not only 55 years of canon, but Whitaker’s place as the first female Doctor, too! What a mess. The only thing keeping the BBC from cancelling is the… Read more »

Jodie Whittaker is great as Dr Who, but the current show is still garbage because of bad writting and crappy stories.

im a fan of jodie whittaker , however not so much the way the current showrunners retconned all 50+ years of cnon, the doctor created the time lords, and isnt the “alien” we thought , stupid, and was also to punch you in the face political banter, YES, dr who has ALWAYS been “political”, just NOT every episode and so forefront in the stories. HOPEFULLY, when Davies re-takes control, e can refute/retcon, alot of the STUPID decisions of the current showrunners, and get back to fun story telling and maybe right the ship, that has lost viewers over the past… Read more »

Love the idea of the doctor’s daughter! That episode always seemed like there should have been more of Jenny. They got to cross paths sometime and somewhere. It is time to tie that loose ending. Could even have the tenth doctor-double (half human, from the other parallel universe, so aging David Tenant could be cool. What about the children he may have had with Rose.? You could introduce some new characters, and adventures with that idea.

Love this show one of my favorite shows syfy shows enjoy it and love it.