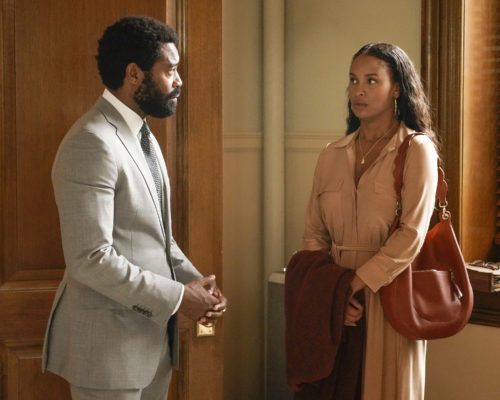 What awaits Aaron in this new phase of his life? Has the For Life TV show been cancelled or renewed for a third season on ABC? The television vulture is watching all the latest cancellation and renewal news, so this page is the place to track the status of For Life, season three. Bookmark it, or subscribe for the latest updates. Remember, the television vulture is watching your shows. Are you?

Airing on the ABC television network, the For Life TV show is inspired by the life of Isaac Wright Jr. and stars Nicholas Pinnock, Indira Varma, Joy Bryant, Dorian Missick, Tyla Harris, and Timothy Busfield. The series follows the tale of Aaron Wallace (Pinnock), an incarcerated man who becomes a licensed lawyer while still in prison. Aaron litigates cases for other inmates while fighting to overturn his own life sentence for a crime he didn’t commit. In season two, Aaron continues his battle against the political machine that once put him away undeservedly while trying to rebuild his life on the outside. He has the continued help from the people who supported him — his family, wily one-time public defender Henry Roswell (Busfield), and his former prison warden, Safiya Masry (Varma).

The second season of For Life averaged a 0.35 rating in the 18-49 demographic and 1.81 million viewers. Compared to season one, that’s down by 38% in the demo and down by 26% in viewership. Find out how For Life stacks up against other ABC TV shows.

Will ABC cancel or renew For Life for season three? Last season, this show was ABC’s lowest-rated scripted series to be renewed. The numbers haven’t gotten any better but it’s a very topical show right now. It seems likely to be cancelled, especially since ABC doesn’t own the show outright. However, it’s reportedly done well on Hulu (which Disney controls) so it could move there for year three.  I’ll update this page with breaking developments. Subscribe for free alerts on For Life cancellation or renewal news.

5/14/21 update: For Life has been cancelled so there won’t be a third season on ABC.

What do you think? Were you hoping that the For Life TV show would be renewed for a third season? Are you sorry that ABC cancelled this TV series, instead?

We love this show we want more of it. The show speaks of the reality of what’s going on maybe the network can have some encouragement to keep it going.

We love this show. It is so relevant to today’s society and needs to be renewed. The acting is magnificent and subject matter fantastic.

This show is brilliant and I hope you keep it for many more seasons. Love Love this show!!

Please do not cancel this show. It is really a great show. I do not know how it could have low ratings. This show has great actors, and also brings out what our country is going through in these times. We look forward to this show each week. Please renew it.

For Life is one of the best dramas on tv. It is truly exceptional- so timely and so well acted. I honestly cannot imagine how this show could be cancelled. Please give us Season 3 and, hopefully, many more!

PLEASE,PLEASE,PLEASE,PLEASE, DONT CANCEL “FOR LIFE”!!!!! Its a very meaningful story with wonderful actors and storylines. I truly love this show so much! I dont want to see another great show being canceled. PLEASE renew For Life for season 3. I would be forever grateful!!!!!!!

This show is so compelling..IT MUST GO ON!! Been a long time since ABC brought people of color a show we can watch with PRIDE!!

As a longtime journalist for print media, it is rare that I am captivated by the writing and acting of a new show. “For Life” is one of the exceptionally brilliant shows that has it all. And, real life. It took the series a little while to get into the hearts of viewers, please give it a third season. It will become one of the best ever shows on TV!! the world needs this show, especially now.

I love this series. It showcases the real issues is communities of color and depicts these members as caring heroes. We need to continue this portrayal of real life.,

Please don’t cancel For Life!!! It is an excellent show and great actors and storyline. Please renew it for Season 3. I’m so tired of great shows being cancelled and you not listening to what the people like. Please listen this time!!

I absolutely love the series For Life. Best drama show I’ve seen in a very long time. I really really hope that the show continues. I’ve watched it from day one. Never been disappointed in any of the episodes. It’s just a great show.